Moderna (NASDAQ:MRNA) has a problem. And it’s a really good problem to have. The company has a growing cash stockpile on its hands and needs to find something to do with its money.

This is an easy problem to solve, of course. Moderna plans to invest in its internal research and development programs. Its board of directors approved a $1 billion share repurchase program. The company is also looking at possibly making acquisitions.

That’s where Editas Medicine (NASDAQ:EDIT) just might come into the picture. Will Moderna potentially buy Editas to jump into gene editing? 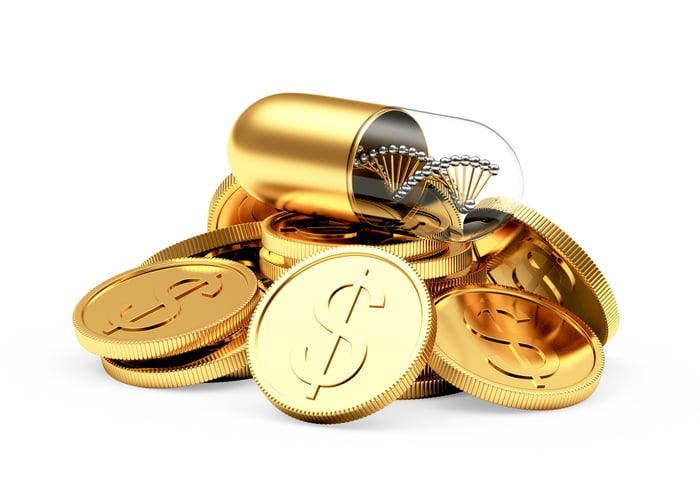 Moderna certainly wants to add gene-editing therapies to its pipeline. The company’s intentions were made perfectly clear on its second-quarter conference call.

CEO Stéphane Bancel stated that Moderna’s second priority (after investing internally) “is to expand our horizons by complementing our platform with external technologies or products. This means we are interested in nucleic acid technologies, gene therapy, gene editing, mRNA.”

Moderna President Stephen Hoge said that the company has “watched the [gene-editing] space quite interestingly or quite significantly in terms of ways that we could help with delivering gene-editing cargoes across a range of different tissues.” Hoge added, “And we think it’s the right time for us to start to expand in that direction.”

The company ended the second quarter with a cash position of more than $12 billion. Moderna’s cash stockpile will grow even larger with its COVID-19 vaccine expected to rake in another $14 billion or so in the second half of this year. That gives the company ample financial flexibility to go on a shopping spree.

Why Editas could be a ripe target

To be sure, Moderna didn’t mention Editas Medicine nor any other gene-editing company as a potential acquisition candidate. However, there are several reasons why Editas could be a ripe target for a buyout.

If Moderna prefers to acquire a clinical-stage biotech with a gene-editing focus, there aren’t many alternatives. Editas is one of only three companies with CRISPR gene-editing therapies currently in clinical testing.

CRISPR Therapeutics is joined at the hip with Vertex Pharmaceuticals, which has also teamed up with Moderna. Intellia Therapeutics is partnering with Regeneron on its lead candidate. However, Editas doesn’t have a partner for its lead program. That could put the company higher on Moderna’s list.

Editas is also the least expensive by far of these three clinical-stage CRISPR-focused biotech companies. The company’s lower market cap could make it a more attractive target if Moderna doesn’t want to spend all of its cash.

While its two rivals focus only on CRISPR-Cas9 (Cas9 is a nuclease that locates and binds to targeted genes), Editas has another nuclease in its arsenal — Cas12 (also known as Cpf1). Editas believes that Cas12 could increase its opportunities to develop gene-editing therapies.

Don’t put the cart before the horse

Although there are several solid reasons why Moderna might want to acquire Editas, it’s too soon to speculate that a deal will actually materialize. Moderna could prefer to buy a preclinical-stage company with promising gene-editing technology.

Also, Moderna likely won’t limit itself to acquisitions. The company could choose to partner with one or more gene-editing biotechs instead of buying any of them outright.

However, look for Moderna to move forward with its plans to expand into gene editing sooner rather than later. Now that the company has tipped its hand about its interest, it could spur other big drugmakers to make their own business development deals with gene-editing leaders. Even if Moderna doesn’t come calling, Editas could find others who will.

This article represents the opinion of the writer, who may disagree with the “official” recommendation position of a Motley Fool premium advisory service. We’re motley! Questioning an investing thesis — even one of our own — helps us all think critically about investing and make decisions that help us become smarter, happier, and richer.