The relationships between the patents and applications in the ‘127 interference are set forth in this chart (filed in CVC’s earlier preliminary motion): 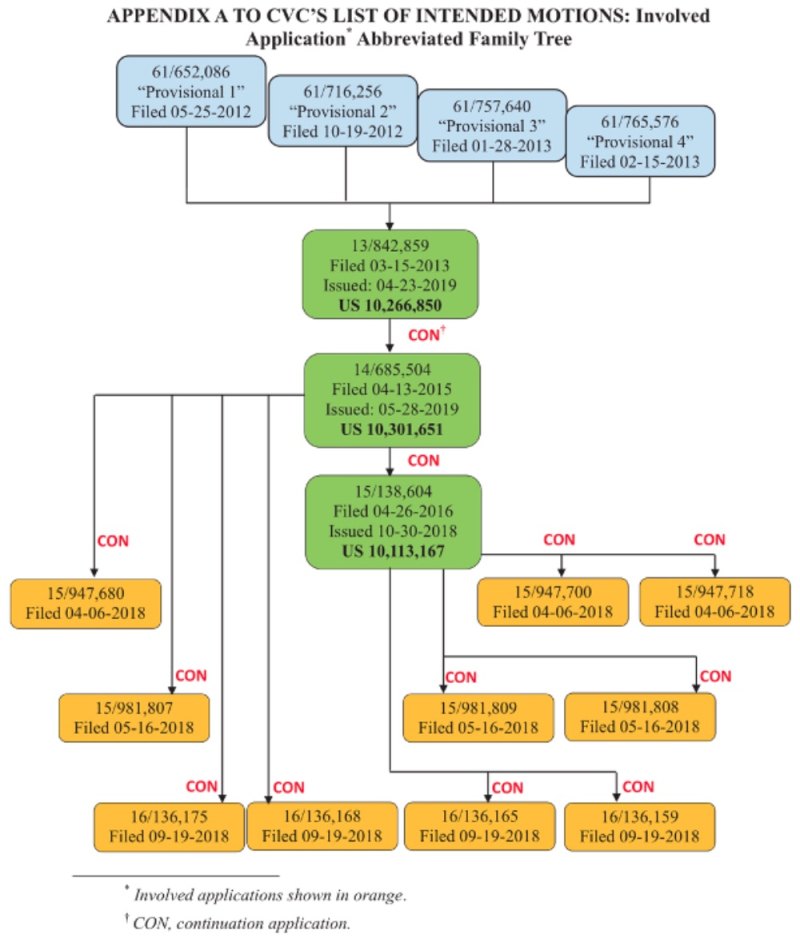 ToolGen challenged CVC’s entitlement to priority benefit to the P3 provisional on the basis that it did not disclose “successful cleavage of DNA within eukaryotic cells, nor does it otherwise show a constructive reduction to practice of an embodiment within Count 1.”

ToolGen’s argument depended on three assertions.  First, the brief identified a single Example (Example 2) in the P3 provisional application directed towards purported eukaryotic cell embodiments of CRISPR gene editing.  Second, ToolGen asserted that the Example (and Figures 38B and 36E related thereto) did not provide an adequate description because “Figure 38B shows alleged cleavage bands at positions where there should be none and in some instances no bands where there should be bands.”  Similarly, ToolGen asserted that Figure 36E “independently contains so many unexplained bands as to make it so shaky and unreliable that a [person of ordinary skill in the art or] POSA would not view it as showing possession of an embodiment within Count 1.”  Taken together, ToolGen argued that “the Figures cannot be evidence that discloses successful cleavage to a POSA in eukaryotes, and the applicants’ failure to sequence the resulting products further cements this conclusion.”  Third, ToolGen argued that “applicants lysed the cells before DNA extraction such that they left the Cas9 protein active to cleave DNA outside of intact cells, as opposed to within the eukaryotic cell as required by Count 1” and “a POSA would understand that any cleavage shown in the gel results cannot confirm that cleavage occurred within eukaryotic cells.”  These allegations were supported by expert testimony (Dr. Turchi) to the effect that a POSA at the time of the invention would not have considered the P3 disclosure to satisfy the statutory requirements under 35 U.S.C. § 112.  ToolGen’s position (echoing positions taken by Broad in Interference no. 106,115) was that “adapting the native prokaryotic CRISPR-Cas9 system to cleave DNA within eukaryotic cells was highly unpredictable” based on the many differences between the prokaryotic milieu where CRISPR was expressed natively and eukaryotic cells (the existence of the nucleus, packaging genomic DNA in chromatin, the intracellular components for gene expression in eukaryotic cells, and the resulting uncertainty ToolGen alleges arises as a consequence regarding whether the CRISPR-Cas9 system could be adapted for use in these cell types).  ToolGen’s brief also contained a detailed explication of CVC’s disclosure in its P3 provisional application, pointing out its purported deficiencies.

CVC’s Opposition make two counter arguments: first, that ToolGen’s critique failed to show that the ‘640 provisional application did not disclose a constructive reduction to practice; and second, that specifically Example 2 disclosed an actual reduction to practice supported by peer-reviewed approval in a related scientific paper.  In addition, CVC reminds the Board that it has already granted CVC benefit of priority to the ‘640 application three times (including its decision in the ‘115 interference, in declaring this interference, and in Interference No. 105,048).

With regard to the first opposition argument, CVC faults ToolGen’s expert for purportedly ignoring art (including Barrangou 2012, Science 2012, Mali 2013, and Cong 2013) that would have provided the proper context for judging the sufficiency of the ‘640 application’s disclosure, and would have provided the skilled artisan with confirmation that “no special adaptations were needed to apply CRISPR-Cas9 in eukaryotic cells and that the routine methods and reagents that had been used previously to express RNA and other gene-editing nucleases had also been used to implement CVC’s CRISPR-Cas9 system disclosed in P3” (a position CVC has consistently taken with regard to adapting CRISPR to eukaryotic cells). CVC further argues that ToolGen’s legal argument is defective, requiring actual reduction to practice (CVC stating that ToolGen’s witness “admitted that the human cell embodiment described in Example 2 meets all the elements of Count 1″ (emphasis in brief)).  CVC proffers its own expert (Doyon) testifying contrary to ToolGen’s expert in support of its arguments.

Regarding the second argument, CVC counters ToolGen’s litany of “alleged inconsistencies” in Example 2 of the ‘640 application with the acceptance of the scientific community of the patency of its evidence in the Jinek et al. 2013 reference, stating the conclusion in the art that “Jinek et al. demonstrate the capability of RNA-programmed Cas9 to introduce targeted double-strand breaks into human chromosomal DNA, thereby inducing site-specific genome editing reactions.”  CVC also notes that ToolGen during prosecution of its patents-in-interference had represented to the U.S. PTO that “we and others have reported RNA-guided genome editing in human cells in January, 2013.”  And CVC asserts that the ‘640 application discloses multiple examples of eukaryotic cell embodiments of CRISPR, in “a fish cell, human cell, and fruit fly cell” using microinjection or lipofection of CRISPR-Cas9 complexes produced in vitro.

CVC relies on the burden of proof ToolGen must satisfy to prevail in its motion, that the ‘640 application did not disclose a constructive reduction to practice of a single embodiment falling within the scope of Interference Count 1, citing Falkner v. Inglis, 448 F.3d 1357, 1362 (Fed. Cir. 2006), and Lawson v. Bruce, 222 F.2d 273, 278 (C.C.P.A. 1955) (for the standard in interferences), and Ariad Pharmaceuticals, Inc. v. Eli Lilly and Co., 598 F.3d 1336, 1352 (Fed. Cir. 2010) (en banc) (generally regarding written description).  Applying this standard, CVC’s brief makes its argument that the ‘640 application provides a constructive reduction to practice in view of the understanding of the ordinarily skilled worker at the time the invention was made and disclosed therein, addressing each of ToolGen’s allegations in its Motion No. 2 in the call-and-response format mandated by the Standing Order.  In addition to the references cited above, CVC argues that contemporaneous work (ironically, by the Broad) showed that achieving CRISPR in eukaryotic cells “required only routine techniques” (a position not inconsistent with its position in the ‘115 Interference).  And CVC accuses ToolGen’s expert of ignoring this evidence, which the skilled worker would not have done (and thus would have come to the opposite conclusion according to CVC).

CVC also argues that ToolGen (and their expert) erred in being “focused” on the data rather than the disclosure in Example 2 in the ‘640 application.  This is a finely balanced argument, insofar as on the one hand CVC is correct that they are not required to show actual reduction to practice but, on the other hand, deficiencies in the data (as alleged by ToolGen) could reduce the confidence of the skilled worker that what is disclosed is a constructive reduction to practice (which after all cannot be inoperative).  CVC bases at least some of its arguments on in vitro assembly of CRISPR-Cas9 complexes outside eukaryotic cells as disclosed elsewhere in the ‘640 specification, as well as “eukaryotic expression vectors for expressing sgRNA and Cas9, promoters to drive the expression (including, e.g., Pol II promoters such as CMV and Pol I promoters such as U6 and H1), codon optimization of the Cas9 gene, adding a nuclear localization signal (NLS) to Cas9, routine vector transfection methods, and established cell lines suitable for transfection—all outside of P3’s Example 2” in support of this argument in opposition.

CVC also provides tables containing what it characterizes as admissions by ToolGen’s expert regarding the Example providing a constructive reduction to practice of an embodiment falling within the scope of Count 1 of the interference: 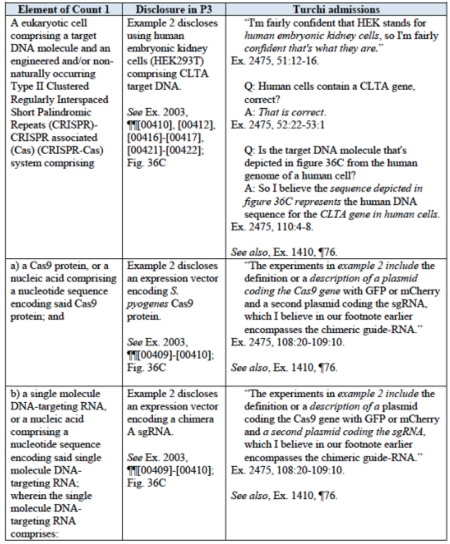 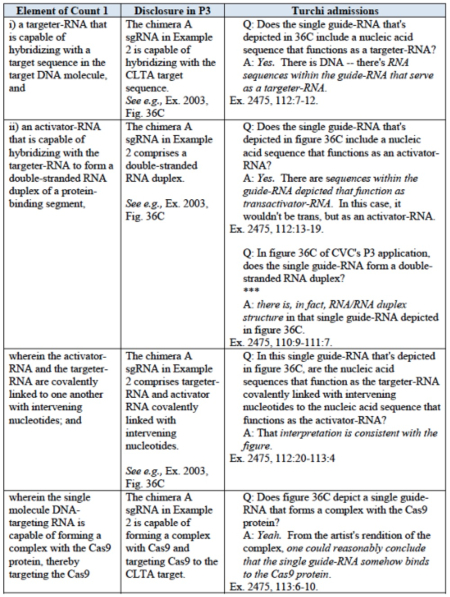 CVC is not content to acquiesce (even implicitly) to ToolGen’s argument that Example 2 of the ‘640 patent is in any way deficient, however, contending that Example 2 provides an actual reduction to practice of eukaryotic CRISPR.  The basis for this argument is acceptance of the same disclosure in contemporaneous, peer-reviewed scientific journal articles by CVC’s inventors.  CVC also cites ToolGen’s inventor (Kim) and expert (Cullen) as citing this journal article as showing successful practice of CRISPR in eukaryotic cells.

Turning to the evidence ToolGen asserted in arguing that the disclosure in the ‘640 application was deficient, CVC provides its own annotation of Figure 36E to argue the skilled worker would interpret the Figure as showing actual reduction to practice:

which CVC compares with Toolgen’s Expert Turchi’s annotations in ToolGen’s Motion No. 2: 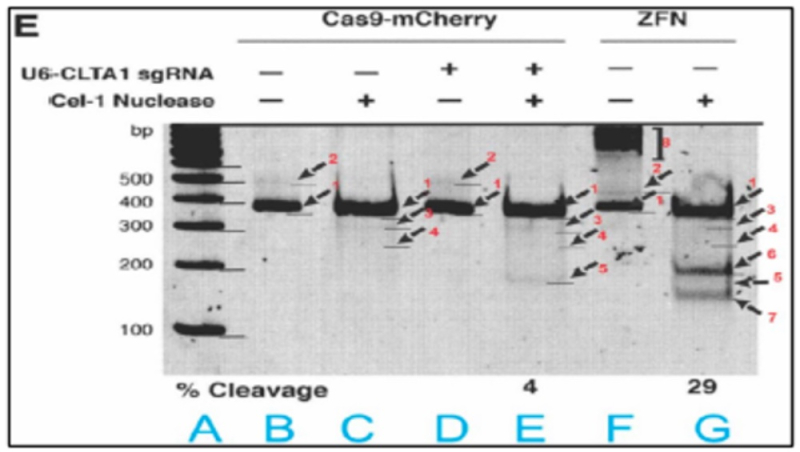 CVC argues that “[t]t is undisputed that the sgRNA-Cas9 cleaved band only appears in Lane E and is not present in any of the negative control lanes” [and] “[i]t is also undisputed that the sgRNA-Cas9 cleaved band in Lane E migrates to a position in between the two ZFN cleavage bands in Lane G.”  CVC contends that these results are consistent with what the skilled worker would have expected from CRISPR cleavage (Lane E) and ZFN cleavage (Lane G) and show actual reduction to practice of CRISPR in eukaryotic cells.  (CVC provides an explanation for the extraneous bands shown in the gel based on known limitations in the methods used to detect these cleavage products.)

CVC provides similar arguments in contradiction to ToolGen’s criticisms of the results shown in Figure 38B, again providing its own annotation of the Figure in contrast with ToolGen’s expert’s assessment: 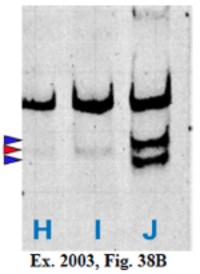 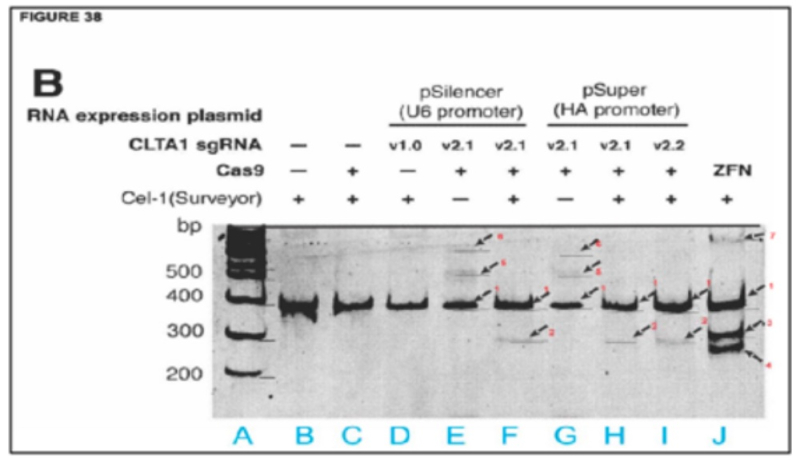 According to CVC, “[t]he relative position of the sgRNA-Cas9-cleaved bands [designated by the colored arrows] is thus completely consistent with what was expected” because “the Cas9-cleaved bands migrated at their expected position in between the two ZFN-cleaved bands.”  Based on this analysis CVC challenges ToolGen’s argument that these results (between the data shown in the two Figures) were inconsistent.

Finally, CVC addresses ToolGen’s argument that even if cleavage was detected it was an artifact of the cell lysis procedure.  CVC argues that the nuclease used in these experiments — S. pyogenes Cas9 — is not active under the conditions (4°C) under which lysis was performed and thus could not have produced artifactual fragments in the lysis mixture.  In addition, CVC contends that the type of modification needed to produce these fragments — non-homologous end-joining — would not have occurred in the lysate because “NHEJ must occur at the cleavage site to create insertions or deletions in the target DNA while repairing the cleaved DNA.”  However, CVC does not expressly address ToolGen’s explication of the data shown in Figure 37A in rebutting the cell lysis argument.

For these reasons CVC asks the Board to deny ToolGen’s Substantive Preliminary Motion No. 2.