The relationships between the patents and applications in the ‘127 interference are set forth in this chart (filed in CVC’s earlier preliminary motion in the ‘115 Interference): 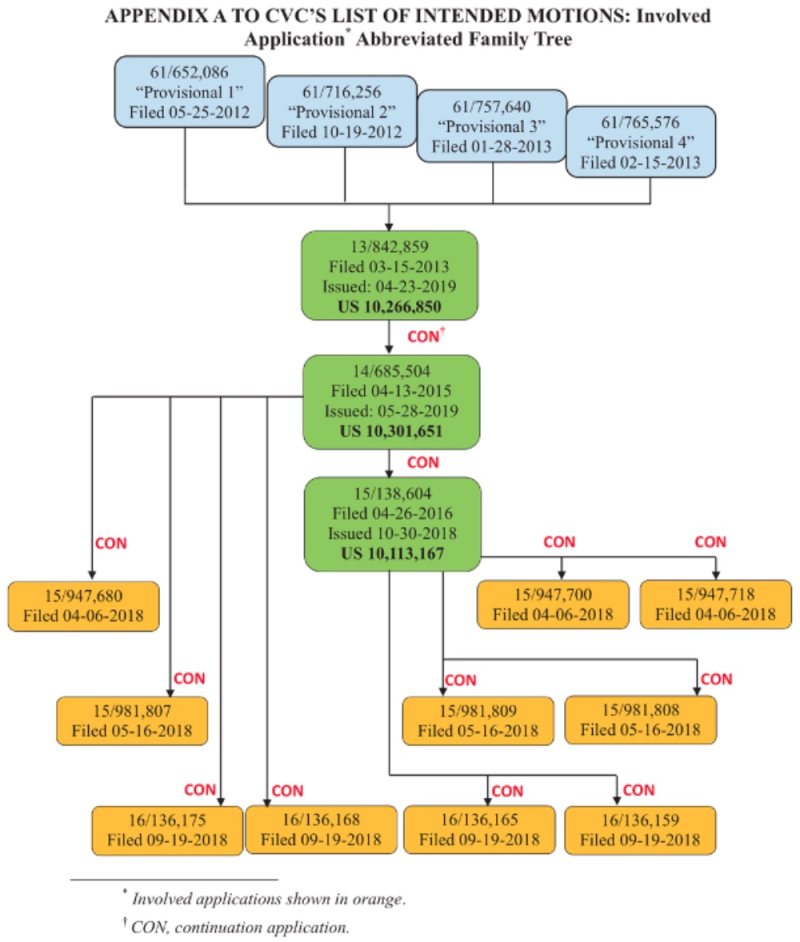 The significance of the Board granting this motion with regard to the P1 or P2 provisional applications would be that CVC would be Senior Party, with all the presumptions benefiting Senior Party status.

In its Preliminary Motion No. 1, CVC argued that its inventors invented eukaryotic cell CRISPR using a single-molecule guide RNA (sgRNA) that is described in each of the three provisional applications. Once that breakthrough had been achieved, CVC argues that adapting CRISPR to the eukaryotic cell environment would have been “pretty straightforward” (quoting Dr. Luciano Marraffini, who informed the Broad inventors of the sgRNA embodiment in June, 2012 (see “CVC Files Motion in Opposition to Broad Priority Motion“). CVC supported this assertion with contemporaneous consistent statements from other scientists; by the existence of “platforms that had already been successfully used with the two incumbent systems: zinc-finger nucleases (“ZFNs”) and transcription activator-like effector nucleases (“TALENs”)”; and by the successful practice of CRISPR by several groups (including ToolGen) “[j]ust months after CVC presented this work” and the absence in the reports from any of these groups of “any ‘special’ adaptations or conditions needed to achieve CRISPR gene editing in eukaryotic cells.”

CVC also addressed the PTAB’s decision not to grant CVC’s patents and applications in the ‘115 patent the benefit of priority to the P1 and P2 provisional applications sought here; the basis for that decision, according to CVC was that it was made “without the benefit of the now well-developed evidentiary record,” specifically, that “[t]he prior decision credited assertions that have been seriously undermined by evidence presented during the priority phase of the ‘115 interference.” Part of that evidence is that the P1 provisional “contemplates and teaches that the sgRNA CRISPR-Cas9 system can be microinjected as a pre-assembled ribonucleoprotein (“RNP”) complex into embryos, including fish cells (“E1″), which obviates the concerns alleged in the ‘115 interference” (emphasis in brief). In view of this evidence, concerns raised by Broad regarding eukaryotic CRISPR embodiments (“RNA and protein expression, co-localization, and assembly”) are avoided because the CRISPR-Cas9 complex is already formed in vitro prior to being microinjected into the embryo.

As to ToolGen’s procedural argument, the basis is simple: ToolGen asserts that “[n]one [of the twenty-five facts in CVC’s Statement of Material Facts] allege that P1 and P2 are enabled, or provide material facts that would support [a] conclusion [that P1 or P2 enable practice of CRISPR in eukaryotic cells],” contrary to Standing Order ¶ 121.5.2. Because the Board has mandated that “[a] motion may be denied if the facts alleged in [the SOMF] are insufficient to state a claim for which relief may be granted” under the rule, ToolGen contends that this failure is sufficient for the Board to deny CVC’s Preliminary Motion No. 1.

ToolGen’s second argument is more substantive, reminding the Board that CVC has made these arguments before, and the Board has rejected them (and in one instance the Federal Circuit agreed). As for CVC’s argument that it presents new evidence in support of this motion, ToolGen dismisses that evidence as being “1) irrelevant events that occurred after the filing of CVC’s P1 and 2) litigation-inspired retractions of contemporaneous statements by the inventors and their colleagues that they did not know based upon in vitro or prokaryotic data whether CRISPR-Cas9 would work in eukaryotic cells.” After explicating the Board’s decision-making in prior Interference Nos. 105,048 (see “Regents of the University of California v. Broad Institute, Inc. (Fed. Cir. 2018)“) and 106,115 (see “PTAB Decides Parties’ Motions in CRISPR Interference“) (based on principles of collateral estoppel), ToolGen turns to what it terms CVC’s “supposedly ‘new’ evidence,” characterizing it as being “not new, but are all merely recycled from the ‘048 and ‘115 Interferences”; as “evidence [that] does not change the disclosures of P1 or P2, nor the contemporaneous doubts and concerns of a POSA in 2012”; and “litigation-inspired attempts to explain contemporaneous statements ten years later.” Specifically, ToolGen castigates CVC for arguing in its Motion No. 1 that ZFN/TALENs and CRISPR/Cas9 were the most analogous art, which ToolGen contends has been presented to (and rejected by) the Board before (twice). None of CVC’s arguments in this regard have changed in any material way, ToolGen argues, and the comparison in ToolGen’s view between ZFN/TALENs and CRISPR/Cas9 is an oversimplification based on their limited “commonality” as being “nucleases guided by DNA binding domains.” ToolGen also cites CVC’s own witness as being unwilling to find the two systems to be analogous. Distinctions drawn by ToolGen include that “[t]he DNA binding domains of ZFN/TALENs are made up of amino acids, while DNA binding in CRISPR/Cas9 occurs by Watson-Crick base pairing between nucleotides” and “[u]nlike the prokaryotic CRISPR/Cas9 system, both ZFN and TALENs have binding domains evolved to function in eukaryotes” (and thereby have been adapted to functioning on chromatin). As for other DNA cleavage systems (“Group II introns, ribozymes, and riboswitches”) cited by CVC, ToolGen dismisses them as being “inapposite” because, inter alia, “[a] POSA would have been aware that there had been numerous attempts to use prokaryotic-derived systems in eukaryotes and that success had been unpredictable, at best.”

Turning to CVC’s argument regarding direct injection of CRISPR-Cas9 complexes into eukaryotic (fish or fruit fly) cells, ToolGen points out that neither of CVC’s P1 nor P2 provisional applications discloses these embodiments (which the Board recognized in rejecting CVC’s priority claim in both the ‘048 and ‘115 interferences). In addition, ToolGen argues that using direct injection of CRISPR-Cas9 complexes “does not eliminate the potential challenges of chromatin access, degradation, and toxicity” that were in part the bases for the Board rejecting CVC’s priority claim in earlier interference proceedings (it is “not the panacea CVC claims it to be”). ToolGen sets out the scientific bases for its contention in this regard, including the (unknown) propensity for the preformed CRISPR-Cas9 complexes to dissociate before being able to cleave eukaryotic DNA and the potential for the nucleic acid components of the complexes to trigger an interferon response in a eukaryotic cell.

With regard to CVC’s declaration evidence proffered in support of its Motion No. 1, ToolGen asserts that “all of these witnesses have significant professional or personal investments in CVC’s success in these Interferences” and that “[t]heir statements also provide no new information that would change the Board’s reasoning that CVC is not entitled to the benefit of P1 or P2.” In particular, ToolGen states that “none of these fact declarants can now change the message created by Dr. Doudna, or voiced by Dr. Carroll, that in 2012 those in the field doubted whether CRISPR/Cas9 could be successfully used in eukaryotes” (CVC’s rhetorical Achilles’ heel throughout these interferences). The remainder of ToolGen’s opposition regarding CVC’s “new” evidence consists of a detailed explication of the purported deficiencies in these witnesses’ testimony, including importantly that in some instances for some of the witnesses “much of their declarations are inadmissible hearsay.” ToolGen’s most concentrated attack on CVC’s evidence are no fewer than seven contemporaneous quotations from Jennifer Doudna herself, attesting to her uncertainty regarding whether CRISPR could be successfully adapted to eukaryotic cells.

Having addressed CVC’s evidence and arguments, ToolGen finally turns to its substantive argument regarding deficiencies in the disclosure of the P1 and P2 provisional applications. The evidence CVC asserts in support of its argument for priority (E1, fish embryo; E2, human cell; and E3, a fruit fly cell) “only arise by piecing together, with the benefit of hindsight, disparate disclosures that are hundreds of paragraphs apart in the specification, and an entirely cell-free, in vitro example with prokaryotic target DNA,” ToolGen contends. Importantly, ToolGen states that “the experimental results in P1 and P2 do not show that the system is capable of acting on a eukaryotic target molecule in a eukaryotic cell as required” because all the experiments disclosed in the P1 and P2 provisional applications are performed in vitro in a cell-free environment. ToolGen argues that the eight elements on the claimed invention embodied in the Count are not combined in the provisional specification to provide an enabling disclosure but are “picked and pieced together from various unrelated aspects of the 2012 disclosures with the benefit of hindsight of how CRISPR/Cas9 ultimately succeeded in eukaryotes.” And neither of these prior provisional applications discloses the single guide RNA species as recited in the Count according to ToolGen.

Finally, ToolGen comtends that, “[i]n the summer and fall of 2012” a POSA would have understood the CRISPR field to be “nascent” and that “[n]o one had yet shown use of CRISPR/Cas9 systems in eukaryotic cells.” In that context, ToolGen argues, “a POSA would have needed to see relevant indicia that an applicant claiming to be in possession of a CRISPR/Cas system successfully adapted for use in eukaryotes had more than a mere hope or plan for eukaryotic CRISPR/Cas9,” citing Centocor Ortho Biotech, Inc. v. Abbott Labs., 636 F.3d 1341, 1348 (Fed. Cir. 2011), for this principle. In view of the obstacles known to at least potentially exist that could thwart adaptation of CRISPR to the eukaryotic cell context, according to ToolGen (which the brief sets forth again extensively) disclosure of in vitro, cell-free CRISPR experiments in the P1 and P2 provisional application would not satisfy the possession test required by the written description requirement. Neither does either provisional provide an enabling disclosure, ToolGen argues, due to the uncertainties arising from these (at least theoretical) obstacles. Post-filing evidence is irrelevant, ToolGen asserts, “because an applicant cannot use post-filing evidence to show that the art was predictable and the invention was enabled,” citing In re Wright, 999 F.2d 1557, 1562–63 (Fed. Cir. 1993), and their publication in “well-regarded [scientific] journals is inconsistent with CVC’s argument that achieving eukaryotic CRISPR was routine; after all, “if the experiments ‘set forth in these articles, especially those successes in eukaryotes, were mere routine experimentation based on the written descriptions in the patent specifications, it is unlikely that they would have been published in such prestigious journals,'” citing Enzo Biochem, Inc. v. Calgene, Inc., 188 F.3d 1362, 1376 13 (Fed. Cir. 1999).

Accordingly, neither the P1 not P2 specifications disclose eukaryotic embodiments of CRISPR to be entitled to priority benefit for the Count, and ToolGen asks the Board to deny CVC’s Preliminary Motion No. 1.