On May 20th, Junior Party the University of California, Berkeley; the University of Vienna; and Emmanuelle Charpentier (collectively, “CVC”) filed its Substantive Preliminary Motion No. 2 in Interference No. 106,127 (which names ToolGen as Senior Party), asking the Patent Trial and Appeal Board to deny ToolGen benefit of priority to U.S. Provisional Application No. 16/717,324, filed October 23, 2012, pursuant to 37 C.F.R. §§ 41.121(a)(1)(ii) and 41.208(a)(3) and Standing Order ¶ 208.4.1.  The significance of the Board granting this motion would be that CVC would be Senior Party, with all the presumptions benefiting from Senior Party status.  On July 5th, ToolGen filed is opposition to this Motion.

In its Motion No. 2, CVC argued that the Board should deny ToolGen priority benefit to the ‘324 application because this application does not disclose an operative embodiment falling within the scope of the interference Count, based on party admissions.  Specifically, CVC argued that in the prosecution of the ‘324 patent application leading to allowance (and declaration of this interference), ToolGen had argued to the Patent Examiner (and PTAB) that “a codon-optimized Cas9 nucleic acid is required for CRISPR-Cas9 to function in eukaryotic cells” and that “a skilled artisan would have no idea what the outcome may be if one were to codon optimize a Cas9 nucleic acid.”  This position was consistent with the prokaryotic source of Cas9, and the Board and Examiner relied upon these arguments to find allowable claims in the ‘324 application (now claims designated as corresponding to the Count in this interference) according to CVC.  All such claims require use of a Cas9-encoding nucleic acid that is codon-optimized for expression in eukaryotic cells, and CVC asserted that ToolGen added this limitation to the claims to overcome anticipation and obviousness rejections based on the prior art.

But, CVC argued, ToolGen’s ‘324 application does not disclose a codon-optimized Cas9 nucleic acid, nor (by ToolGen’s own argument according to CVC) would the skilled worker be able to discern such a nucleic acid with any reasonable basis for expecting such an embodiment could be produced using the disclosure in the ‘324 application.  Accordingly, CVC argued in its motion, ToolGen cannot in this interference renounce these arguments and rely on the priority date of the ‘324 patent to constitute a constructive reduction to practice for eukaryotic CRISPR-Cas9 embodiments falling within the scope of the interference Count.  Thus, according to CVC, the Board should deny ToolGen priority benefit to the ‘324 application (and redeclare the interference naming CVC as Senior Party).  The brief contained examples from the ‘324 prosecution history and at oral argument before the Board in support of its allegations.

ToolGen, characterizing CVC’s arguments (as did CVC, citing Zedner v. United States, 547 U.S. 489 (2006), and Springs Window Fashions LP v. Novo Industries, L.P., 323 F.3d 989, 995 (Fed. Cir. 2003)) as sounding in judicial estoppel, argues this is a “misrepresentation of the prosecution history” and that the ‘324 application provides a constructive reduction to practice of eukaryotic CRISPR as defined under CVC’s portion of the Count in this interference (and that CVC does not effectively challenge this disclosure) but not ToolGen’s portion of the Count.  ToolGen affirmatively argues that the ‘324 application “describes a successful experiment using a codon-optimized nucleic acid encoding Cas9 to yield a Cas9 protein complex that functions in eukaryotes to cleave DNA” in support of this assertion.  But more fundamentally, ToolGen argues, Count 1 in the interference does not require codon-optimized Cas9 as part of a eukaryotic CRISPR complex and thus CVC’s argument (and Motion) should fail.

ToolGen sets forth the legal basis for denying a party accorded benefit, when the priority document “does not provide a constructive reduction to practice of an embodiment within the count,” under 37 CFR §41.208(b); and S.O. ¶¶ 121.3 and 208.4.2 and citing Hunt v. Treppschuh, 523 F.2d 1386, 1389 (CCPA 1975).  Regardless of the distinction between the CVC and ToolGen portions of the Count, ToolGen argues it does not matter because the ‘324 application “expressly describes the use of a codon-optimized nucleic acid encoding Cas9 to achieve DNA cleavage in a eukaryotic cell, satisfying both halves of Count 1.”  And, according to ToolGen, CVC does not dispute (indeed, admits) that the ‘324 application disclosure satisfies CVC’s portion of the Count.  Rather, ToolGen contends, CVC tries to rewrite the Count to include a limitation to codon-optimized Cas9 protein without requesting leave to revise the Count in this manner, providing another reason why its Motion should be denied.

ToolGen distinguishes the circumstances here with the legal requirements for judicial estoppel based on its version of the prosecution history.  According to ToolGen, its argument to the Examiner and the Board was that its claims to eukaryotic CRISPR embodiments were not obvious because the skilled worker would not have had a reasonable expectation of success in view of the cited prior art and hence were non-obvious.  In ToolGen’s view, codon-optimization and conjugation with a nuclear localization signals were elements of their claims that overcame “the then-prevailing unpredictability and pessimism” regarding eukaryotic embodiments of CRISPR.  ToolGen’s point is that their claims were not enabled by comprising codon-optimized and NLS conjugated Cas9 species, but that such embodiments rendered eukaryotic CRISPR non-obvious.  Nevertheless, ToolGen argues (and explicates in its brief) that its ‘324 application disclosed three CRISPR embodiments functional in eukaryotic cells and thus is entitled to priority benefit.  It was the Examiner who focused on codon optimization (mistakenly, according to ToolGen) and that error was the basis for its successful appeal to the Board.

ToolGen contends that CVC cites to the prosecution history “selectively and inaccurately,” in a rare rhetorical flourish arguing that “[i]ts Motion relies on contextual fragments of arguments, statements with omitted words, and disparate questions and answers, all stitched together like Frankenstein’s monster, to assemble a false narrative that ToolGen achieved patentability by focusing on codon optimization, not the unpredictability in prokaryote-to-eukaryote translation.”  Interestingly, ToolGen argues that the portion of the Board’s interrogation of their representative cited in CVC’s Motion No. 2:

is misleading because the purported answer above is to a different question.  Properly understood the colloquy reads as follows: 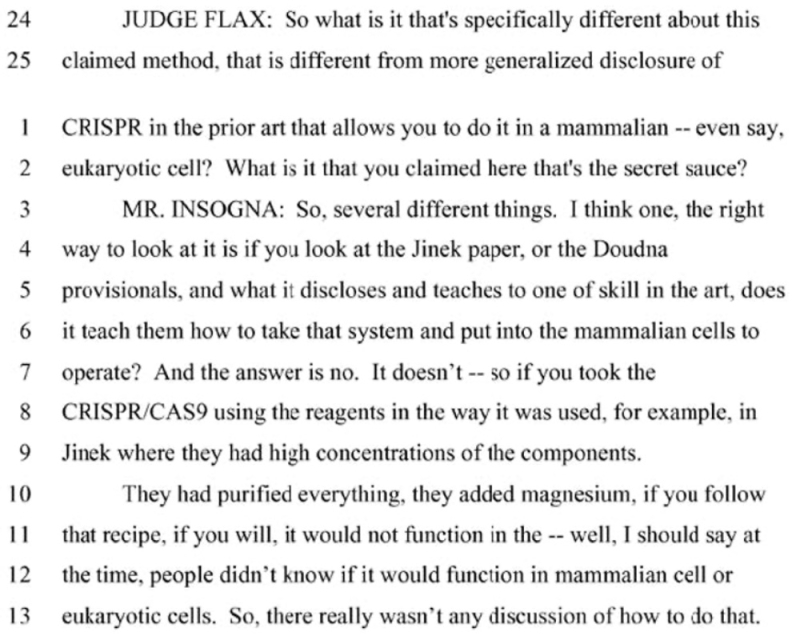 And, according to ToolGen, its answer regarding codon optimization was to a question by another judge on the ex parte panel to a different question (“whether one of ToolGen’s pending claims contained limitations as to ‘amounts or levels of different things’ that would distinguish ToolGen’s claims from prior art”): 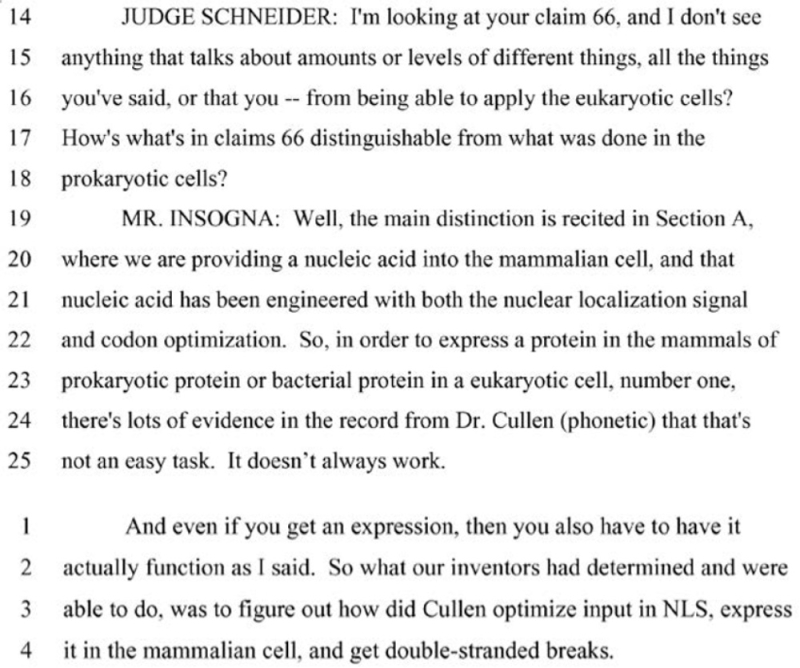 ToolGen asserts these answers are consistent with its disclosure of codon-optimized Cas9 protein being used to achieve eukaryotic CRISPR conjugated to an NLS.

In addition, ToolGen rebuts CVC’s argument that it told the PTO during ex parte prosecution that codon optimization was itself unpredictable.  According to ToolGen, prior to its achievement of using CRISPR in eukaryotic cells “there were multiple reasons . . . why an ordinary artisan would have had no reasonable expectation of successfully transitioning prokaryotic CRISPR/Cas9 to eukaryotic cells” of which codon optimization was but one.  This argument is consistent with what Broad has argued in Interference Nos. 105,048 and 106,115 regarding the unpredictability of adapting CRISPR to the eukaryotic environment and with ToolGen’s own expert (who testified during ex parte prosecution that codon optimization might cause unpredictable effects on Cas9 folding and hence operability in a eukaryotic cell).

Turning to the question of judicial estoppel, ToolGen argues that it took no position during ex parte prosecution that is contrary to its position in this interference and hence there is no factual or legal basis for CVC’s judicial estoppel argument.  Moreover, ToolGen argues, there is no basis for believing that the Board during ex parte prosecution reversed the Examiner and held ToolGen’s claims to be non-obvious based on unpredictability of codon optimization.  Nor according to ToolGen does prosecution history estoppel cure these purported deficiencies in CVC’s argument, because it is inapplicable to the priority question before the Board.

ToolGen’s primary affirmative argument in rebutting CVC’s challenge to its priority claim is that CVC did not dispute or establish that the ‘324 application failed to satisfy the disclosure requirements for priority benefit in an interference.  ToolGen maintains that CVC’s expert erred (and was coached to err, based on the expert’s declaration evidence) by not considering the disclosure question properly from the point of view of the ordinarily skilled worker.  This prejudice renders his evidence “both irrelevant and unreliable” according to ToolGen and should be disregarded, citing AAT Bioquest, Inc. v. Texas Fluorescence Laboratories, Inc., 2015 WL 1738402, *5-*7 (N.D. Cal. 2015), for this principle.  ToolGen also rebuts CVC’s argument that the ‘324 specification did not disclose human codon-optimized Cas9, stating that the passage below from the ‘324 specification makes this disclosure (albeit “just not in CVC’s quoted words”) that would be understood by the skilled artisan, something both sides’ experts agreed with (with emphasis in brief):

ToolGen completes its rebuttal of CVC’s arguments by asserting that an ordinary artisan would not have required a sequence listing to appreciate that the ‘324 specification disclosed codon-optimized Cas9, citing Falko-Gunter Falkner v. Inglis, 448 F.3d 1357, 1368 (Fed. Cir. 2006), and that a nucleic acid construct encoding such a codon-optimized Cas9 would not need “enhanced” expression to display the CRISPR phenotype.

For all these reasons ToolGen asks the Board to deny CVC’s Preliminary Motion No. 2.