In its Motion No. 3, CVC argued that the only difference between the language of the Count and the claims in the ‘380 patent is that those claims require the addition of two guanine residues (“GG”) positioned before the crRNA portion of the sgRNA sequence.  CVC argued that these species of sgRNA (the fusion of crRNA and tracrRNA) recited in the ‘380 patent claims are a consequence of using the T7 phage RNA polymerase to produce sgRNA and that in vitro RNA production using T7 RNAP promoters was well-known in the art (“for decades“; emphasis in brief) at the priority date of the ‘380 patent; these arguments are supported by testimony from CVC’s expert, Dr. Scott Bailey.

This method of producing sgRNA and relevant prior art disclosing the use of T7 RNAP and promoters recognized by the polymerase was set forth in the brief as follows: 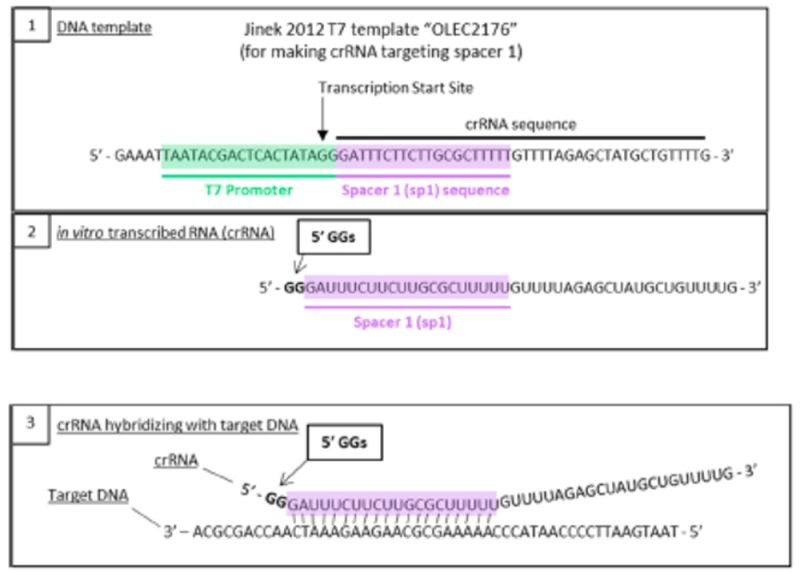 wherein the diagrams follow the source of the characteristic “extra” GG residues at the 5′ end of crRNA and sgRNA produced thereby.  CVC also asserts as second reference, the Deltcheva reference, to illustrate the extent to which T7-catalyzed in vitro RNA production using a T7 promoter was well-known:

CVC argued that the distinction of including two guanine residues in crRNA and sgRNA comprised thereof is not enough to distinguish the claims of the ‘380 patent from the Count in this interference (to which CVC argues these claims correspond) because “including a 5’-GG would have been obvious over Count 1 in view of [CVC’s] Jinek 2012” reference as illustrated above, which reliance is permitted under Desjardins v Wax, Interference No. 105,915, Paper 127, 17-20 (P.T.A.B. Jan. 21, 2014).  Regarding motivation to combine the teachings of the Jinek reference in this regard with the more general teachings of producing an sgRNA for eukaryotic CRISPR, CVC argued that such motivation is supported by the method’s “low cost, efficiency, and accuracy,” and because “Jinek 2012 had already used the method to generate RNAs that effectively cleave eukaryotic DNA sequences (e.g., GFP) in CRISPR-Cas9 systems (i.e., ToolGen knew the method would be successful in eukaryotic CRISPR).  This success also would have provided the requisite reasonable expectation of success to complete a prima facie case of obviousness and hence for the ‘380 claims to properly be determined to correspond to the Count in this interference.

ToolGen argues in its opposition that the claims of the ‘380 patent do not correspond to Count 1 of this interference and that CVC’s motion does not comply with the requirements of 37 C.F.R. §§ 41.202 and 41.203.  With regard to the substantive question, ToolGen’s brief focuses on whether the Count would render those claims obvious (because the lack of the two guanine residues positioned before the crRNA portion of the sgRNA sequence in the Count precludes anticipation, i.e., each and every limitation in the claim is not found therein).  And, ToolGen contends, Count 1 alone cannot render the ‘380 patent claims obvious (and CVC did not so argue).  Thus, the issue is whether the combination of the language of the Count and the disclosure of the Jinek 2012 reference raises a prima facie obviousness case, which ToolGen maintains it does not.  ToolGen’s reasoning is that, at the priority date of the ‘380 patent (October 23, 2012), “(1) a POSA would not have been motivated to combine Count 1 and Jinek; (2) a POSA would not have had an expectation of success in implementing the CRISPR/Cas9 system of independent claim 1 in eukaryotic cells; and (3) the claims of the ‘380 patent exhibit superior properties and advantages that a POSA would have found surprising or unexpected.”  ToolGen’s reasoning reiterates in part the argument raised in its opposition to CVC’s Preliminary Motion No.2, that Jinek describes use of prokaryotic CRISPR-Cas9 in a “non-cellular, experimental environment,” citing the Board’s decision in Interference No. 105,048 and the Federal Circuit’s affirmance thereof.  Further, ToolGen argues that the Jinek 2012 reference does not describe any experiments using CRISPR in eukaryotic cells nor introduction of CRISPR complexes into such cells.  Finally, ToolGen cites the PTO’s determination during prosecution of the ‘380 patent that Claim 1 of the ‘380 patent was non-obvious over the Jinek 2012 reference which is binding here, citing Harris Corp. v. Fed. Exp. Corp., 502 F. App’x 957, 968 (Fed. Cir. 2013), and Glaxo Grp. Ltd. v. Apotex, Inc., 376 F.3d 1339, 1348 (Fed. Cir. 2004).

ToolGen also challenges CVC’s contention that the skilled worker would have been motivated to combine the teachings of the Jinek 2012 reference with the subject matter of Count 1 in support of a prima facie obviousness case.  The basis for this argument is that “nothing in the prior art—cited by CVC or otherwise—’suggest[s] the desirability’ of RNA transfection—a method necessitated by Jinek—as a method of introducing sgRNA (or ‘guide RNA’) into eukaryotic cells as of the priority date” (emphasis in brief), citing In re Fulton, 391 F.3d 1195, 1200 (Fed. 21 Cir. 2004), and Forest Labs., LLC v. Sigmapharm Labs., LLC, 918 F.3d 928, 22 934 (Fed. Cir. 2019).  This argument is based on the limitation recited in Count 1 to a method for “introducing into [a] eukaryotic cell” a CRISPR-Cas9 complex comprising an sgRNA. Jinek’s disclosure in limited to a method for preparing RNA by in vitro transcription (emphasis in brief) and this RNA would be understood by the skilled worker to be introduced into eukaryotic cells using RNA transfection techniques, ToolGen asserts, which were not routinely employed in the art.  And the Jinek 2012 reference provides no disclosure (being “entirely silent” on the question) regarding RNA transfection that would overcome these limitations in the prior art according to ToolGen (supported by copious citations to that art).

ToolGen also argues that the prior art, including the Jinek 2012 reference, did not disclose any reason to introduce two guanine residues before the crRNA portion of the sgRNA sequence, asserting that it was the ‘380 patent inventors who first discovered that doing so resulted in greater specificity.  Accordingly, ToolGen states, “as of the priority date, a POSA would have understood the Jinek method as having inherent limitations, i.e., the requirement of one or more guanines at the 5’ end, without any known benefit.”  Indeed, ToolGen makes the case that the state of the prior art would have preferred using eukaryotic promoters, such as the U6 promoter, as part of a DNA plasmid encoding sgRNA as the preferred method for producing (rather than introducing using RNA transfection methods fraught with known difficulties) sgRNA in a eukaryotic cell for achieving CRISPR in such a cell.  (After all, ToolGen notes that CVC’s own application, filed three months after the ‘380 patent’s priority date, utilized plasmids encoding sgRNA expressed using a eukaryotic promoter to produce RNA in a eukaryotic cell.)

ToolGen next turns to CVC’s argument that the skilled worker would have had a reasonable expectation of success in combining the Jinek 2012 reference with the limitations of Count 1 to achieve  CRISPR in a eukaryotic cell.  ToolGen bluntly asserts such a POSA would not have had such a reasonable expectation of success because it had been established by the Board, and affirmed by the Federal Circuit, “that as of 5 December 2012—two months after the priority date—a POSA ‘would not have reasonably expected success’ in implementing CRISPR/Cas9 in eukaryotic cells” by any means.  ToolGen refers to “a similar argument” made by CVC in Interference No. 106,115 (against Broad) and CVC’s reliance on the Board distinguishing its decision in the ‘048 interference as meaning that “[e]xpectation of success in eukaryotes would not be in doubt” as of the priority date.  CVC is incorrect, ToolGen argues, because it ignores the distinctions regarding the limitations in Count 1 (which under 37 C.F.R §41.207(b) is considered prior art) and the “problematic nature of RNA transfection as of the priority date” arising in the context of this interference.  Under the prior art presumption regarding the Count, ToolGen argues, “to interpret §41.207(b) as providing for an assumption of a reasonable expectation of success—as CVC suggests—would be inconsistent with the plain language of the rule and Board precedent” and “such an interpretation would effectively nullify the requisite obviousness analysis of §41.207(b).”  Nor does the routine nature of producing RNA in vitro using T7 promoter and polymerase support a reasonable expectation of using such RNA to achieve CRISPR in eukaryotic cells as CVC argues in its Motion No. 3, ToolGen asserts.

Finally, in this regard ToolGen contends that the invention claimed in Claim 1 of the ‘380 patent “exhibits superior properties and advantages that a POSA would have found surprising and unexpected as of the priority date.”  Specifically, these include that having two guanine residues positioned before the crRNA portion of the sgRNA “discriminated off-target sites effectively,” an improvement over a recognized drawback. CVC’s arguments to the contrary, based on other sgRNA configurations lacking the double guanine motif also achieving eukaryotic CRISPR are unavailing to their position, according to ToolGen, because more than one feature of embodiments of an invention in an unpredictable art can have their own surprising and unexpected results indicating non-obviousness.

ToolGen relies on the non-obviousness of Claim 1 of the ‘380 patent in support of its contention that Claims 2-10 are also non-obvious when considered in view of the Jinek 2012 reference in combination with the limitations recited in Count 1 and thus the Board should deny CVC’s motion to designate them as corresponding to the Count and including them in this interference.

For all these reasons, ToolGen asks the Board to deny CVC’s Preliminary Motion No. 3.

2. The method of claim 1, wherein the nuclear localization signal is located at the C terminus of the Cas9 polypeptide.

3. The method of claim 1, wherein the eukaryotic cell is a mammalian cell.

4. The method of claim 3, wherein the mammalian cell is a human cell.

5. The method of claim 1, wherein the nucleic acid encoding the Cas 9 polypeptide is codon-optimized for expression in mammalian cells.

6. The method of claim 1, wherein the target nucleic acid sequence is a genomic sequence located at its endogenous site in the genome of the eukaryotic cell.

7. The method of claim 1, wherein the nucleic acid encoding the Cas9 polypeptide is a vector.