ToolGen’s Substantive Preliminary Motion No. 2 challenged CVC’s entitlement to priority benefit to the P3 provisional in this interference on the grounds that it did not disclose “successful cleavage of DNA within eukaryotic cells, nor does it otherwise show a constructive reduction to practice of an embodiment within Count 1.”  In its Responsive Motion, CVC sought to establish its entitlement to later-filed applications, to retain its best priority position against ToolGen (CVC itself has filed its Preliminary Motion No. 2 to deny ToolGen of the priority benefit to its earliest application, U.S. Provisional Application No. 16/717,324, filed October 23, 2012).  In its Responsive Motion, CVC argued entitlement to the ‘859 application as a matter of law because it is the earliest application having an identical specification to CVC’s applications-in-interference and CVC argues that it therefore is entitled to a presumption that this application provides a constructive reduction to practice thereby, citing Transco Prod. Inc. v. Performance Contracting, Inc., 38 F.3d 551, 556–57 (Fed. Cir. 1994).  CVC’s alternative priority claims were based on the common specification shared by all these applications, comprising “a string of continuation applications [that] thus provide[s] the same disclosure as the involved applications.”  CVC provided the following table of comparison evidence of what is disclosed in the specification of the ‘859 application with each element of the Count: 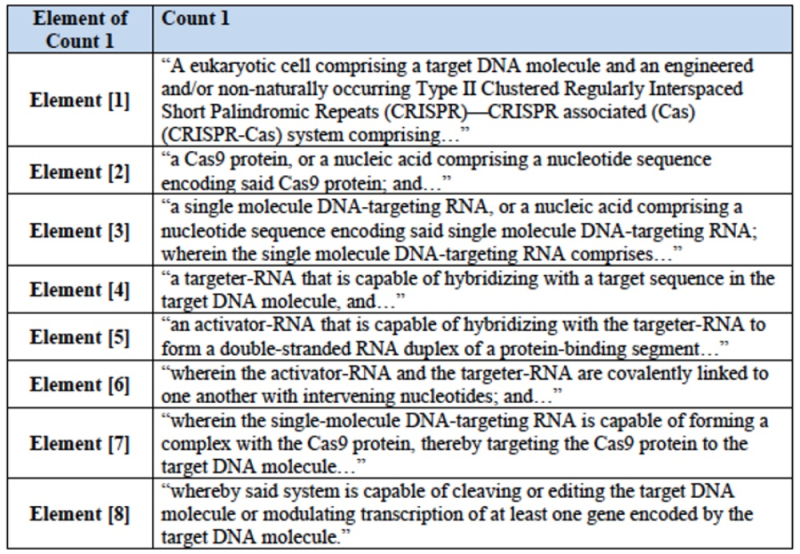 Specifically, CVC argued that Examples 4, 5, and 7 set forth a constructive reduction to practice of an embodiment falling within the scope of the Interference Count.

ToolGen disagrees, arguing in its Opposition that CVC failed to carry its burden of showing the constructive reduction to practice it alleged.  As an initial matter, ToolGen cites CVC’s argument that the disclosure in the three non-provisional applications here has been continuously disclosed in earlier provisional applications (U.S. Provisional Application No. 61/652,086, filed May 25, 2012 (“P1”), U.S. Provisional Application No. 61/716,256, filed October 19, 2012, (“P2”), and U.S. Provisional Application No. 61/757,640, filed January 28, 2013 (“P3”), priority to which CVC asked the Board to accord benefit in its Substantive Preliminary Motion No. 1 (opposed by ToolGen separately).  ToolGen understandably repeats (in brief) its principal argument in that Opposition, that CVC has not shown that CRISPR-mediated DNA cleavage in eukaryotic cells would have been a matter of routine and predictable experimentation, based inter alia on the Board’s decisions in Interference No 105,048 (and Federal Circuit affirmance thereof; Regents of Univ. of California v. Broad Inst., Inc., 903 F.3d 1286, 1291–92 (Fed. Cir. 2018)) and Interference No. 106,115 to the contrary.  And ToolGen here, as it has done in its own Preliminary Motion No. 2 to deny priority benefit, argues that the Board erred in granted CVC priority benefit to its P3 provisional application (U.S. Provisional Application No. 61/757,640, filed January 28, 2013) in the ‘115 Interference because it did not consider ToolGen’s arguments that CVC had not satisfied the constructive reduction to practice requirement for this provisional (again, briefly recounting their earlier arguments here).  ToolGen thus makes its first argument on the backs of its earlier arguments with regard to the P1, P2, and P3 priority documents, because if CVC was not entitled to priority to them then the Board should not grant CVC priority benefit to the three non-provisional applications at issue here in the face of CVC’s representations that the disclosure in Examples 4, 5 and 7 was the same in these non-provisional applications and the earlier-filed provisional applications.

ToolGen then sets forth for each of these Examples its arguments why they are defective in satisfying the disclosure requirements for entitlement to priority benefit.  For all these Examples ToolGen asserts that they lack “definitive evidence that CRISPR-Cas9 modulates transcription of at least one gene encoded by the target DNA molecule in eukaryotic cells” due to failure to include “proper experiments and controls” for human cells (which were included for examples using E. coli).  Regarding Example 4, ToolGen maintains that because the Example states that the results merely imply reduced target gene expression as a consequence of CRISPR cleavage, the Example leaves open the door for a skilled worker to entertain other explanations for the reported results and thus not be convinced that the inventors possessed the claimed invention.  ToolGen faults the Example for failing to show that the disabled Cas9 protein was expressed in a human cell and localized to the cell nucleus.  A “critical failure,” according to ToolGen’s Opposition, is that Example 4 provides no direct measurement of gene transcription in the cell, which is an affirmative limitation in the Count (“modulating transcription of at least one gene encoded by the target DNA molecule”).  Without this direct measurement, ToolGen asserts the skilled worker “would not have concluded that Example 4 discloses the constructive reduction to practice of an embodiment of the Count.”  Moreover, even assuming for argument that modulation of transcription had been demonstrated, what is disclosed (reduction in green fluorescence protein-catalyzed fluorescence) could be explained by many other mechanisms than CRISPR-specific ones, ToolGen contends.  In addition, ToolGen argues that there is no evidence for specific CRISPR-catalyzed gene-expression repression, i.e., non-targeting gene expression could also be being experienced in the cell (in another instance where the proper controls were performed in parallel experiments using E. coli but not in the human cell experiments according to ToolGen).  ToolGen also contends that Example 4 does not demonstrate gene expression modulation for endogenous cellular genes, or even more than the single GFP-encoding gene introduced exogenously.

Turning to Example 5, ToolGen argues that it is apparently a “follow-up experiment” from those disclosed in Example 4.  Accordingly, ToolGen asserts that this Example suffers from “all the same issues” as Example 4, i.e., (in summary) “absence of any evidence that a complex is indeed formed and then binds the target gene, the lack of proper controls to demonstrate specificity in modulating the target genes, the absence of studies on endogenous genes to dispel concerns arising from gene integration, and the absence of any measurements to detect gene transcription instead of just GFP fluorescence.”  In addition, ToolGen contends that this Example reports only a low level of gene expression modulation with no explanation regarding its magnitude, or that the results were due to specific “RNA-mediated targeting” of the GFP target sequence.

Example 7 differs from the other two as being “strictly prophetic,” being a “plan” to produce transgenic mice expressing Cas9.  However, ToolGen maintains that there is no guidance for making such mice nor any experimental results regarding performing CRISPR in transgenic mice or cells derived therefrom and thus this Example does not satisfy the requirements for CVC to receive benefit of priority thereto.

For all these reasons, ToolGen asks the Board to deny CVC’s attempt to be according benefit of any of these three prior patents.