The more we learn about pathogens, the clearer it becomes that we’ll never escape them

Historical writing is always rooted in present-day life, always an answer to what the past can illuminate about our current discontents. Years before “phrases like ‘herd immunity’ and ‘emerging variant’ became household terms,” says Kyle Harper in an interview, the University of Oklahoma historian was already at work on Plagues Upon the Earth: Disease and the Course of Human History.

Even before the arrival of COVID-19, close brushes with disaster—SARS in 2003 and MERS in 2012, both coronaviruses—and a newly amassed mountain of genetic data had opened the gate for scholars to take a fresh look at the intertwined evolution of humanity and its pathogens.

“I’m riding some strong currents,” says Harper, noting that globalization has brought an awareness of global history in its wake. “There’s a real interest in our common deep history, a desire to capture something about us that really can’t be captured when we divide the past along national lines or even by centuries.”

He notes that humans were wrong in the mid-1900s to foresee a “final victory” over infectious diseases. “Biological disruption, humans changing their environment or entering new ones, is one of the great forces in human history. Our pathogens themselves continually adapt—emerging, going extinct, getting worse, getting less virulent. Now with COVID-19 we see all that unfolding in real time.” 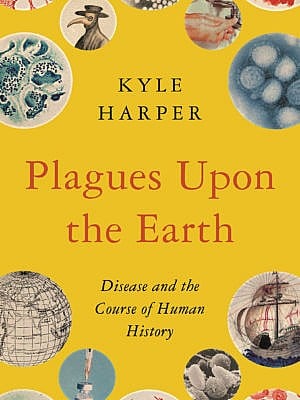 Plagues Upon the Earth: Disease and the Course of Human History by Kyle Harper (Courtesy of Princeton University Press)

What made Harper’s eye-opening book possible is “high-throughput” genome sequencing, a technology that rapidly sequences millions of DNA molecules at a time, and has revolutionized phylogenetics (the study of evolutionary family trees) and paleogenomics (the study of ancient DNA).

Scientists have long known that humans had more, and more varied, pathogens than any other species. Using a rule-of-thumb filter—including only pathogens that kill 50,000 people or sicken five million yearly—Harper counts 236. They are a byproduct of human success, the historian points out: we live in almost every environment on Earth and we constantly change the environments, driving pathogen evolution and, inevitably, sudden epidemics.

What the new research reveals is that the story is ongoing and probably never-ending, older than Homo sapiens and also surprisingly recent. Modern humans picked up one strain of the cancer-causing papillomavirus from sexual contact with other hominins after we exploded out of Africa 50,000 years ago.

The consensus scientific idea that human infectious diseases arose from the animals we domesticated during the Agricultural Revolution is belied by the fact that bovine tuberculosis turns out not to be the ancestor of our own. “We had to flip the order,” says Harper. “We made the cows sick, not the other way around.”

Closer to the present, the virulent smallpox strain that ravaged Indigenous populations in the Americas in the early modern era is less than 500 years old. It evolved from one of the older, less virulent variants that left traces in earlier centuries, including within some Viking populations.

MORE: Books to spark or allay our fears in the time of the coronavirus pandemic

New knowledge about pathogen family trees may well be the key to solving a long-standing historical question: why is it that the diseases described by ancient writers can seem both familiar and mysterious? What those epidemic survivors witnessed, phylogenetics reveals, was neither a poor description of a known disease nor a portrait of now-vanished pathogen, but simply an earlier variant.

Not that less-deadly smallpox wasn’t ferocious. The Antonine Plague, which struck the Roman Empire between 165 and 180 CE, may have killed a quarter of the population. Brought back to Rome by legionaries campaigning along the desert borders of the eastern empire, the plague was a quintessential human “success” epidemic. At its height, the Roman Empire projected military power so far afield that it put its troops in a new environment with a new virus, a pattern of human behaviour that echoes through our history. Eight millenniums ago, Bantu yam farmers expanding across West Central Africa brought a new host animal within reach of mosquitoes carrying the deadliest form of malaria.

At the other end of the spectrum, the Black Death built a pyramid of corpses on human failure. In Europe it came upon a subsistence-level population heavily stressed by a changing climate, overpopulation and bad harvests, and killed some 40 million of them in four years.

RELATED: When the plague won: A story of vaccine hesitancy

The effects of pathogens on global human history have been endless. The chronic, endemic killers like tuberculosis and malaria have dictated marriage customs and fertility rates. The explosive epidemics have scythed through virgin populations, especially in the New World.

The Antonine Plague began Rome’s slow decline. The Black Death halved the population of Europe, which of necessity then began its slow turn to a less labour-intensive world—a hallmark of modernity—in everything from farming to war-making machinery. When Europeans began to colonize the Americas, where their own labour shortage was even more acute, they vastly expanded the practice of human trafficking that eventually brought more than eight million Africans to slavery in the Americas.

And everywhere people saw their loved ones perish. One of the finest aspects of Plagues is that Harper takes note of how the worst anguish recorded during epidemics—whether yellow fever or COVID-19—turns on the deep rent in the social fabric. Loved ones not only die, they die alone without the rituals that soothe and channel our grief. An Italian chronicler wrote of the Black Death’s “cruelty”: “None could be found to bury the dead for money or friendship; [they were brought] to a ditch, without priest and without divine offices, nor did the death bell sound. And I, Agnolo di Tura, called the Fat, buried my five children with my own hands.”

This article appears in print in the September 2021 issue of Maclean’s magazine with the headline, “Eternal plague.” Subscribe to the monthly print magazine here.