A mine worker receives a dose of the Pfizer-BioNTech Covid-19 vaccine at Anglo American Platinum’s Tumela mine in Amandelbult, South Africa, on Thursday, 12 August 2021. (Photo: Waldo Swiegers / Bloomberg via Getty Images) 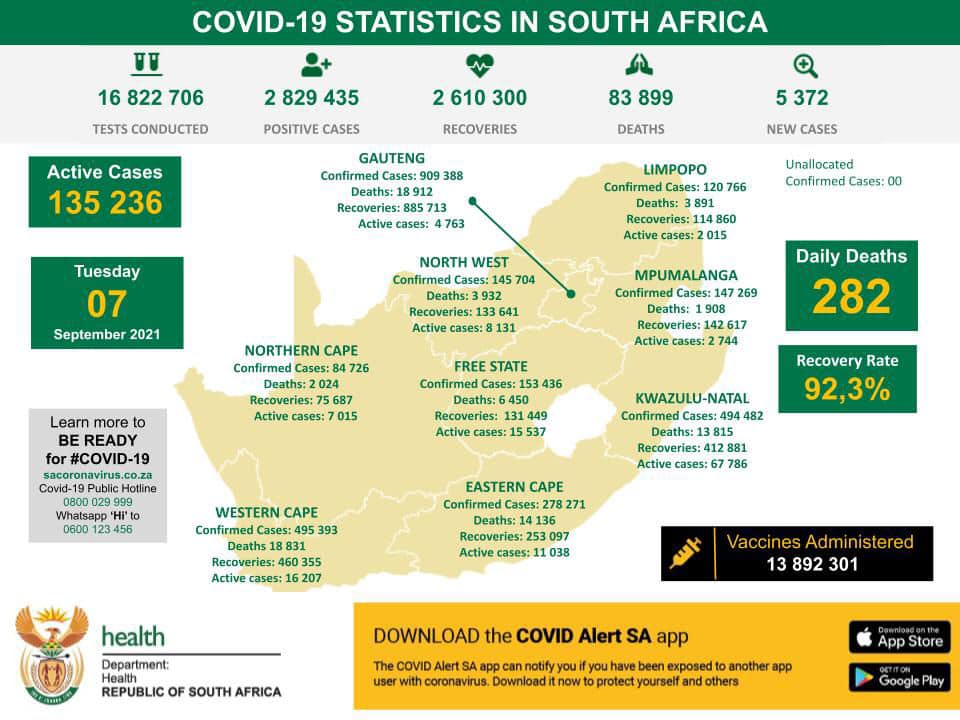 Johnson & Johnson’s vaccine cut infection risk by about half in a trial of South Africa health workers. The study, which found that the vast majority of breakthrough infections were mild, included several weeks of a third wave of infections.

Three-quarters of US adults have received at least one dose of a Covid-19 vaccine. The country hit the 70% threshold in early August, four weeks past President Joe Biden’s target.

Israel is showing the world how evaluating progress against the virus is changing. Though the country has become a pandemic hotspot, the number of severe cases appears to have peaked.

Venezuela receives first vaccines from WHO

Venezuela received 693,600 Sinovac Biotech vaccines, the first shipment purchased through Covax. The shots had been expected to arrive before August but had been delayed for undisclosed reasons. The country is due to receive a total of 12 million doses through the World Health Organization-sponsored programme.

Myanmar’s junta said it wants to receive 10 million doses each in September and October and four million in November. The country targeted vaccinating half its population by year-end.

All working adults, including those of state pension age, will be subject to the higher levies, which are expected to generate £36-billion over the next three years. The House of Commons is expected to vote on the tax package on Wednesday.

Separately, about 80% of people aged 16 and older have been vaccinated with both doses in Britain. Around 89% have received one dose. More than half of all 16- and 17-year-olds in England have received their first vaccine.

US hits 75% mark for adult vaccination

Three-quarters of US adults have received at least one dose of a Covid-19 vaccine. The country hit the 70% threshold in early August, four weeks past President Joe Biden’s target.

The spread of the Delta variant caused another surge of infections in the US over the last month and accelerated vaccinations. But hesitancy among many Americans has left the US well behind many other countries for inoculation. Biden plans on Thursday to address efforts to curb the pandemic.

Johnson & Johnson’s vaccine cut the risk of getting infected by about half, according to a trial of almost half a million health workers in South Africa. The vast majority of the breakthrough infections were mild, the study’s co-leader said, citing unpublished data.

The Sisonke study included several weeks when South Africa was going through a third wave of coronavirus infections, spurred by the highly contagious Delta variant.

Sweden plans to remove the cap on September 29 on the number of people that are allowed to gather for public and private events, said Social Minister Lena Hallengren, citing the country’s successful vaccination campaign. The recommendation to work from home will be lifted as well. The government, meanwhile, is exploring how vaccination passes could be used at large events in case a cap needs to be re-introduced.

Metro Manila, an area that accounts for about a third of the Philippine economy, will remain under the second-toughest restrictions on movement. Restaurants are limited to take-away and delivery business, and beauty salons and spas are shut.

The number of weekly vaccines administered in France decreased to 2.5 million in the week starting August 30 from three million in the two previous weeks, according to the health ministry. The decline reflects shrinking demand as more people get vaccinated, it said in a video conference with journalists. France has so far fully vaccinated 45.6 million people above the age of 11, the equivalent of 67.7% of its total population.

The committee supervising Morocco’s response to the pandemic has endorsed a roll-out of booster shots as early as this month, starting with health workers and other vulnerable groups, Casablanca-based Medias24 reported, citing committee member Said Afif. The spread of the Delta variant among staff has disrupted hospitals’ ability to function, he said.

Zimbabwe’s government ordered state employees who are unwilling to be vaccinated to resign to reduce the risk of spreading the virus.

“If you are now working for us, we are now saying get vaccinated,” Justice Minister Ziyambi Ziyambi said in an interview on Tuesday with privately owned radio station ZiFM Stereo.

China has one mRNA and one DNA vaccine candidate approved for Phase 3 trials overseas, with studies to be kicked off soon, said Zheng Zhongwei, a health official overseeing China’s Covid vaccine development, at a briefing in Beijing.

Candidates are being developed using everything from the virus DNA and parts of its proteins to viral vectors, while companies are also developing inoculations against variants, Zheng said.

Czech Republic has most cases since June

The Czech Republic reported 391 new cases, the highest daily figure since the beginning of June. Health Minister Adam Vojtech said social distancing measures will be scrapped when 75% of adults are vaccinated, up from 66% currently.

Hong Kong will start allowing visitors from China to skip the strict quarantine process required for most arrivals, a key first step toward reopening the border with the mainland and reviving a flow of visitors that’s long been crucial to the local economy.

The city will start a “Come2hk” travel programme on September 15 that will let up to 2,000 non-Hong Kong residents per day from the mainland and Macau visit the city, Hong Kong Chief Executive Carrie Lam said at a regular press briefing on Tuesday morning.

The government will also resume a programme that allows residents to return from mainland China without quarantine, starting on Wednesday.

Qantas Airway is likely to fly to several new overseas destinations next year after pushing ahead with plans to resume international flights from December.

Singapore, one of the world’s most vaccinated countries, is taking new steps to slow a rampant increase in cases but can’t rule out returning to closing restaurants and restricting public life if serious infections continue to rise.

“We have to slow down the transmission rate,” said Lawrence Wong, finance minister and co-chair of the government’s virus taskforce. “We will attempt to do so without going back to another heightened alert. These are last-resort measures and we will try our best to refrain from using them, but we should not rule them out entirely.”

Takeda Pharmaceutical said the Japanese government agreed to buy 150 million doses of Novavax vaccine that it will manufacture in the nation subject to licensing and regulatory approval.

The Japanese drugmaker aims to start distribution of the vaccine in early 2022. Separately, the company said it’s working with the health ministry to investigate deaths reported after administration of Moderna vaccines, and that there’s no reason to believe that it poses a health hazard or safety risk.

Thailand reported the least number of new cases since July 22, with the total coming to 13,821. The government is considering ending a State of Emergency.

The portion of tests that turn out positive in Indonesia has fallen to a record low, paving the way for the gradual lifting of movement restrictions.

The positivity rate, an indicator of the prevalence of infection in a community, fell to 4.43% on Monday – the first time in the pandemic that the nation has met the World Health Organization’s recommendation of below 5%.

Third death in Japan amid probes

Japan’s health ministry said that a man in his 40s died after receiving the Moderna vaccine from production lots that are being recalled due to possible contamination, public broadcaster NHK reported.

The cause of death hasn’t been determined. Moderna and its distributor in Japan, Takeda Pharmaceutical, said last week the recalled lots may be contaminated with stainless steel particles, but ruled out they were the cause of the earlier deaths of two men.

South African scientists said the so-called C.1.2 variant spread at a slower rate in August than in the prior month, suggesting it’s unlikely to become a dominant strain. The new variant accounted for just 1.5% of all virus samples sequenced in the country last month compared with 2.2% in July, according to the Network for Genomic Surveillance South Africa.

The variant, first identified in South Africa, has been found in a number of countries including the Democratic Republic of Congo, Mauritius, Portugal, New Zealand and Switzerland. DM