A new system for sampling fragments of DNA from marine organisms drifting in the ocean is set to create new opportunities for research into biodiversity and ways of supporting conservation activities.

Over the past decade biodiversity researchers have increasingly used DNA sequences extracted from environmental samples such as soil, marine and fresh water, and even air – termed environmental DNA (eDNA) – to identify the organisms present in a huge range of habitats.

Sequencing these tiny traces of DNA has proved a powerful technique for detecting elusive species that may only rarely be observed directly, or in early life stage, when they may be difficult to identify, revolutionising biodiversity discovery and monitoring.

Researchers from the University of Milano-Bicocca in Italy and the University of Leeds have developed an innovative new approach for collecting marine eDNA samples which promises to open up biodiversity monitoring of remote offshore ocean locations.

The team has developed a novel system for easy sampling that can be deployed from ocean-going ferries and other commercial vessels such as container ships, allowing the possibility of using the global commercial shipping fleet to help monitor marine biodiversity.

Although DNA sequencing is becoming increasingly cost-effective, the biggest challenge is often collecting samples over the large geographic areas needed to scale up these new monitoring techniques to a global reach.

Sampling marine eDNA far from land usually depends on access to dedicated research vessels, which are complex and expensive to operate. These logistical constraints limit the geographic scope and frequency of surveys, impeding the expansion of large scale eDNA surveys.

The new system does not require complex equipment deployed from a ship; water is collected from the engine cooling system with simple apparatus and can be carried out by non-specialists. Since commercial vessels regularly cross remote corners of most of the world’s oceans, they could provide almost limitless opportunities for sample collection to contribute to biodiversity monitoring programmes.

The team collaborated with Corsica-Sardinia Ferries, which supports a long-term visual survey programme for cetaceans run by ISPRA (Italian Institute for Environmental Protection and Research; also a partner in the current study), to test the system, on their route between Livorno in Tuscany, and Golfo Aranci in Sardinia.

The results showed the ferry-collected samples had traces of DNA from all parts of the vertebrate ecosystem, ranging from small prey fish at the base of the food chain, such as anchovies and sardines, through small and larger predatory fish such as tuna and swordfish, all the way to dolphins, and ocean giants including fin and sperm whales.

The power of eDNA

Dr Simon Goodman, from Leeds’ School of Biology, is co-lead author of the report, published in Frontiers in Marine Science.

He said: “When we first started to dig into the sequencing results I was astounded as to how well it had captured the structure of the vertebrate ecosystem.

“It’s a really exciting result and highlights the power that eDNA has for revealing fine scale ecological variation”. 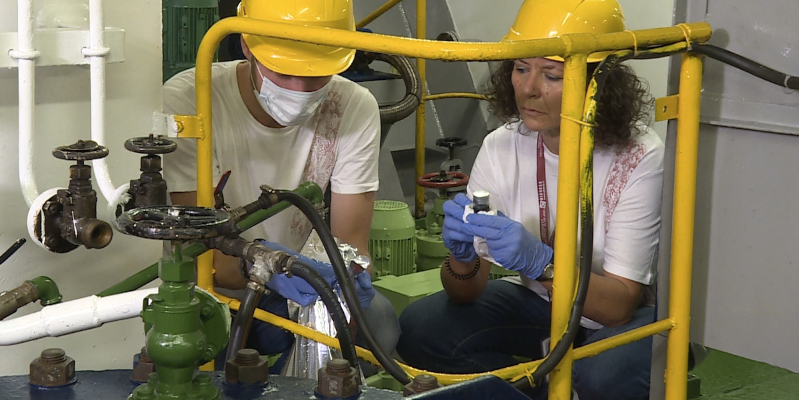 One of the study leads, Dr Elena Valsecchi from the Department of Environmental and Earth Sciences at the University of Milano-Bicocca, said: “This innovative methodology applied to environmental DNA allows us to make a sort of CAT [computerized axial tomography] scan of the sea.

“Next we will be scanning multiple ferry routes in the Mediterranean in order to produce a high-resolution ‘image’ on the state of biodiversity in our seas.”

Overall, eDNA from 100 unique vertebrate species were detected, with species composition proving to be a good match for that known from the Mediterranean from conventional survey techniques.

In addition, the team detected fine scale variation in species occurrence related to environmental factors, such as that the relative abundance of sequences for anchovy and sardines correlated with the different water temperatures the species are known to prefer for spawning.

Sequences from deep-sea species such as lantern fish, were more frequent at night for some samples, corresponding with the daily vertical migrations through the water column such bathypelagic species are known to make.

The work was partially supported by a crowd funding programme (MeD for Med, 2020-CONT-0312 – Bicocca Università del Crowdfunding) and an Erasmus scholarship to Roberto Lombardi which supported a visit to the University of Leeds to conduct laboratory work.

For further details contact Ian Rosser in the University of Leeds press office.