On May 28th, Junior Party the Broad Institute, Harvard University, and MIT (collectively, “Broad”) filed its Substantive Preliminary Motion No. 1 in CRISPR Interference No. 106,126, where ToolGen is the Senior Party.  This Motion shared many similarities to a similar motion filed in Broad’s Interference No. 106,115 against the University of California, Berkeley, the University of Vienna, and Emmanuelle Charpentier; Junior Party and collectively, “CVC”), but there were significant differences in the proposed Count 2 in this interference and the proposed Count 2 proposed in the ‘115 Interference (wherein the Board denied Broad’s motion in that interference).  On August 6th ToolGen filed its Opposition. 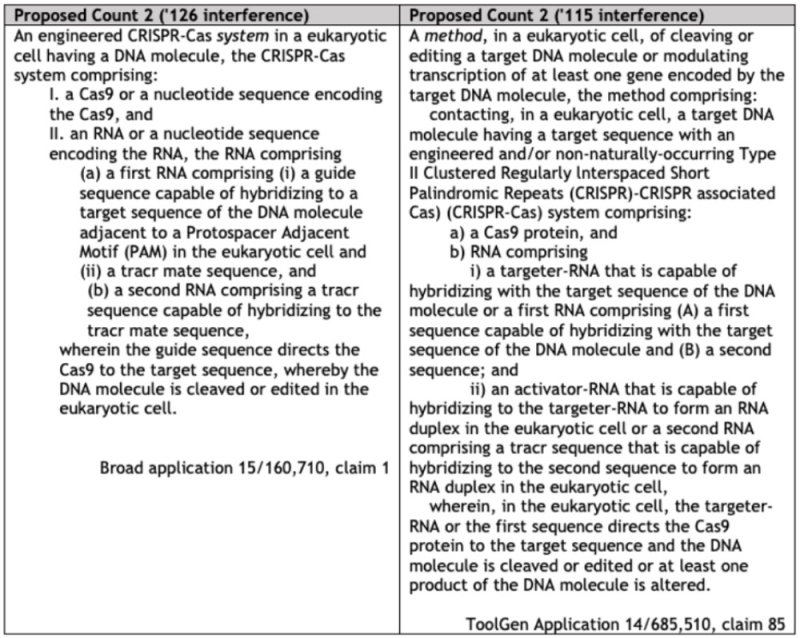 Turning to its second basis for Opposition, ToolGen argues that contrary to Broad’s arguments, proposed Count 2 is broader than the common claimed invention between the parties because, as instituted by the Board, existing Count 1 is limited to single-molecule RNA embodiments of eukaryotic CRISPR and that common claimed subject matter is what defines an interference, citing Beech Aircraft Corp. v. Edo Corp., 990 F.2d 1237, 1248–49, and Louis v. Okada, 59 22 U.S.P.Q.2d 1073, 2001 WL 775529 at*4 (B.P.A.I. 2001).  ToolGen asserts (factually) that its claims corresponding to Count 1 are limited to single-molecule RNA eukaryotic CRISPR embodiments (which ToolGen maintains Broad admitted when it characterized ToolGen’s claims as comprising “both dual- and single-molecule RNA configurations of CRISPR-Cas9 before amending to only the single-molecule approach currently claimed in their involved patent application” (emphasis in brief).  That its initially filed claims comprised both single- and dual-molecule embodiments is irrelevant according to ToolGen’s brief because the interference as declared was limited to ToolGen’s single-molecule embodiments.

ToolGen then turns to Broad’s “best proofs” arguments.  To this, ToolGen replies that Broad’s Motion does not establish or identify its best proofs sufficiently for the Board to properly assess this argument and that regardless Broad’s proposed Count 2 improperly “adds and removes elements” of the current Count.  As for Broad’s deficiencies in establishing its best proofs, ToolGen cites the Board’s decision in Interference No 105,048 that it is proper to broaden a Count “only i[f] there is a compelling reason to do so” and that “[a]rguments that a moving party’s best or earliest proofs are outside the scope of the existing count are ordinarily not compelling by themselves.”  Regents of Univ. of Cal. v. Broad Inst., Interference 106,115, Decision on Motions, 6 Paper 877, *33 (P.T.A.B. Sept. 10, 2020).  Rather, the standard according to ToolGen is that a party moving to substitute a Count in an interference is that the party “(1) should make a proffer of the party’s best proofs, (2) show that such best proofs indeed lie outside of the scope of the current count, and (3) further show that the proposed new count is not excessively broad with respect to what the party needs for its best proofs” citing Louis v. Okada.  ToolGen’s brief then sets forth with specificity its arguments regarding how Broad failed to satisfy these requirements, including inter alia failure to proffer testimony (that could be subject to cross-examination) from fact witnesses including Broad inventor Zhang.  What evidence there is proffered regarding Dr. Zhang’s work is unsubstantiated hearsay or factually deficient according to ToolGen.  In this regard, ToolGen provides this synopsis of Broad’s purported failures under the first prong of Louis:

In summary, Broad has not met its burden of supporting its motion with “appropriate 5 evidence.”  37 C.F.R. § 41.208(b).  Broad fails to provide sufficient information to evaluate whether its “best proofs” merit expansion of the count.  Byrn v. Aronhime, Int. No. 105,384, Paper 64, at 11 (B.P.A.I. Sept. 20, 2006).  The proofs that Broad relies upon do not even suggest, let alone prove, that Broad conducted dual-guide experiments before it conducted any single-guide experiments, or that it reduced to practice every element of the proposed count.

Turning to prong 2 of the Louis test, ToolGen argues that Broad’s own admissions vitiate Broad’s arguments regarding its best proofs falling outside Count 1 of the ‘126 Interference as declared.  These included a declaration Broad submitted during ex parte prosecution, which included the statement that the inventors had an “appreciation that a single RNA can be used as a guide in the CRISPR-Cas system, including as shown by the RNA used in the experiment of the below figure entitled ‘CRISPR NTF3 Surveyor . . . .'”  ToolGen also contends that such statements and positions taken during ex parte prosecution should raise an estoppel (judicial) against Broad from making such arguments in this interference, if only because such statements and positions, according to ToolGen, permitted Broad to get claims encompassing single-molecule RNA embodiments of eukaryotic CRISPR, citing Zedner v. United States, 547 U.S. 489, 504 (2006), as applied to agency adjudications, citing Trustees in Bankr. of N. Am. Rubber Thread Co. v. United States, 593 F.3d 1346, 1354 (Fed. Cir. 2010).

Finally in this regard, ToolGen argues that Broad’s Proposed Substitute Count No. 2 is overbroad and would “eliminate significant limitations on the current count” (specifically the limitation that “expression of at least one gene product is altered” (emphasis in brief).

ToolGen then turns to Broad’s argument that the Board could grant Broad’s Preliminary Motion No. 1 or designate claims that are not explicitly limited to single-molecule RNA embodiments of eukaryotic CRISPR to not correspond to the Count.  “A determination that single-molecule RNA eukaryotic CRISPR systems are separately patentable from dual-molecule RNA systems is fatal to Proposed Count 2, because a count cannot include two separately patentable inventions” according to ToolGen’s Opposition.  (ToolGen notes that Broad made similar arguments in the ‘115 Interference and the Board rejected them.)

Finally, ToolGen argues that Broad failed to bear its burden to show that the new Count is unpatentable over the prior art.  ToolGen expressly requests that the Board reject Broad’s argument that the Board’s decision in the ‘048 Interference supports Broad’s arguments based on differences in claim scope.

The brief ends with ToolGen’s challenge to Broad’s assertion of five sets of its claims that do not correspond to Proposed Count 2.  ToolGen contends that Broad has not met its burden of showing that Proposed Count 2 would not have anticipated nor rendered obvious the claims at issue, under 37 C.F.R. § 41.207(b)(2), 37 C.F.R. §§ 41.121(b) and 41.208(b), and providing reasons therefor with regard to the use of vectors for RNA expression, Streptococcus aureus Cas9 protein, chimeric Cas9 species (including fusion with heterologous protein domains), and two or more nuclear localization signals in eukaryotic embodiments of CRISPR.