The human body is home to an estimated 39 trillion microbial cells, mostly in our guts, but also in our mouths. Recently, scientists in the US conducted a study using a novel fluorescent imaging technique that revealed high-resolution maps of the complex microbial communities living on the human tongue. 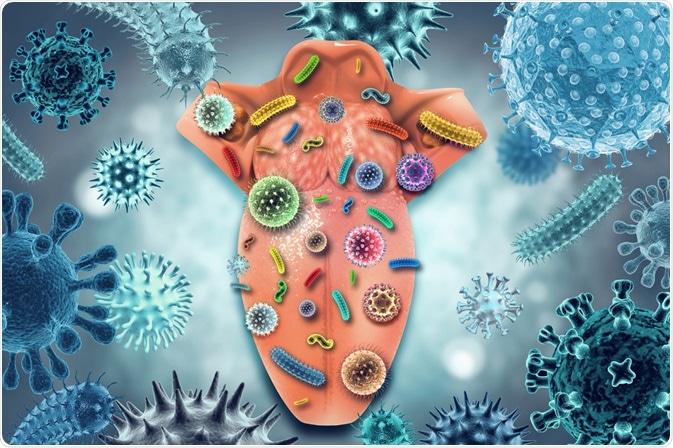 Interestingly, researchers found that microbes living on the tongue are not spaced out randomly, rather, they live in clusters. It appears that microbial species prefer to live close to other microbes of their own species, which forms microbial populations in distinct clusters.

The tongue is home to a large community of microbes

Humans have lived in harmony with numerous species of resident microbiomes for millions of years. The mouth is home to around 700 species of bacteria that live on the teeth, tongue, and other soft tissues, resulting in an oral microbiome that forms a complete, complex ecosystem. Numerous factors impact how microbial communities locate themselves in the oral cavity, such as moisture, oxygen, pH, salivary flow, temperature, and the frequency of abrasions and level of oral hygiene.

Microbes themselves also act as a factor, they can influence their neighbors by acting as sinks of inhibitory molecules (e.g. antimicrobial peptides and hydrogen peroxide), metabolites, and nutrients. Additionally, microbial colonization of one species can physically prevent other microbial species from occupying that space. Finally, microbes present binding sites to which certain microbial species can attach.

While the spatial distribution of microbes on the tongue is complex and important to understanding how these communities work, previous research in the area of microbial ecology has focused on microbial spatial patterning in the oral cavity. Scientists recognized the need to develop a method to measure spatial patterning.

The tongue serves as a traditional reference point for doctors, often, patients are asked to ‘stick out your tongue’ during medical evaluations. Gaining a better understanding of the large community of microbes that live on the tongue could be vital to advancing other areas of medicine.

Recently, a US-based team of scientists developed an innovative fluorescent imaging technique to produce high-resolution maps of the microbial communities that reside on the tongue. In a paper published in March 2021, the team reveal the images they developed, which demonstrate the highly structured spatial organization of the microbial biofilms on the tongue’s surface.

The novel technique is capable of labeling distinct microorganisms via the attachment of fluorophores to their surface, allowing them to be visually identified. Some of the same researchers who developed this technique then used it in a new study where microbes on the tongue were labeled, allowing maps of colonizations to be produced in a single field of view.

Previous studies exploring the nature of bacterial communities have mostly utilized DNA sequencing-based techniques. However, to conduct these, samples must first be ground into a powder to extract the necessary genetic information. Via this method, therefore, all information regarding the spatial structure of the microbial communities is lost. Using the new CLASI-FISH technique offers a way of studying this spatial structure while simultaneously identifying the type of bacteria.

Visualizing bacteria on the human tongue

Major bacterial taxa were first identified from small samples of bacteria obtained by scraping the tongues of 21 healthy volunteers. The imaging technique, guided by sequence analysis, was able to identify major genera and targeted species, generating a comprehensive view of the structure of the microbiome. 17 bacterial genera were identified as being highly prevalent on the human tongue and were present in over 80% of participants.

Researchers found that samples held a combination of free bacteria, bacteria attached to the epithelial cells of the host, and bacteria that had arranged themselves into complex, multilayer biofilms.

These multilayer biofilms, or consortia, had spatially localized domains that were dominated by a single species of bacteria. Results showed that the consortia, while they varied in shape, were generally tens to hundreds of microns in length, had a core of epithelial cells, and a perimeter that was well-defined.

All subjects’ tongues had consortia with the following three genera of bacteria: Actinomyces, Rothia, and Streptococcus. The maps produced by the CLASI-FISH technique revealed that Actinomyces often appeared near to the core, Rothia appeared in large quantities toward the exterior, and Streptococcus was often found in the form of a thin crust on the consortia’s exterior, as well as in the form of veins on their interior.

The results of the study are vital to deepening our understanding of the key species of bacteria that make up the oral microbiome. Further to this, the novel CLASI-FISH technique was able to provide detailed information on the structure of the microbiome for the first time.