U.S. counterintelligence officials have begun a concerted push to warn companies and universities about the risks of working with Chinese entities in key emerging technologies such as artificial intelligence, biotechnology and quantum computing.

They stressed they are not advocating that industry and researchers “decouple” or cut all ties with these entities, but they say they want people to understand that the Chinese government has a sweeping national plan to dominate in these fields.

Beijing’s strategy includes acquiring data and know-how not just by hacking and other illicit acts but also through legal means such as acquisitions, investments and partnerships that businesses and researchers may not realize pose risks, top officials at the National Counterintelligence and Security Center said.

“We think there’s a lot at stake with a lot of these technologies,” said Mike Orlando, acting director of the NCSC, an arm of the Office of the Director of National Intelligence. “If we lose supremacy in these areas . . . we could be eclipsed as an international superpower.”

He said “hundreds of billions of dollars’ worth” of American technology is being targeted by the Chinese government.

Chinese President Xi Jinping has repeatedly urged scientists to make advances that can help ensure the country’s self-reliance. In a speech a year ago, he called for efforts “to foster strategic emerging industries such as quantum communications to gain an upper hand in international competition and build new advantages for development.”

NCSC officials have begun their outreach in the past few months to raise awareness primarily about China but also about Russia, which is striving to make advances in AI and quantum technologies. Other areas that China is particularly active in are semiconductors and autonomous systems, officials said at a briefing for reporters Thursday.

Both China and Russia are recruiting talent abroad and seeking to acquire technology through foreign investments, academic collaborations and joint ventures, although China’s activities in this area are much more extensive, officials said. China, for instance, is making a concerted effort to buy Western semiconductor firms, Orlando said.

In what U.S. officials call the “bioeconomy,” the Chinese are targeting genomic technology that can be used to design disease therapies and identify genetic vulnerabilities in a population, said Edward You, the national counterintelligence officer for emerging and disruptive technologies.

He pointed to China’s largest genomics company, BGI, which purchased the U.S. firm Complete Genomics in 2013. Over the years, BGI has made inroads in American hospitals and health care institutions, offering inexpensive large-scale DNA sequencing, he said. Providing such services is not illegal, but at the same time, he said, BGI is gaining access to massive amounts of Americans’ genetic data.

“Unbeknownst to patients, your data might be transferred to the Chinese government,” he said.

All Chinese entities are compelled by law to share data and technology with the Chinese government, NCSC spokesman Dean Boyd said. “There is no mechanism for refusal.”

You, the counterintelligence officer, said the risk is not just to privacy but to national security. If China can pair such genetic data sets, including the data authorities are already gathering domestically, with artificial intelligence and quantum computing, he said, it may be able to advance to the point where it is first to market with cures for diseases.

“Because of our shortsightedness, we might wake up one day and we’ve become health care crack addicts and China’s become our pusher,” he said.

If they can gain access to Western technology legally, “they don’t need to steal our [intellectual property],” You said. “They’re in it to win it.”

Orlando and You said they are not telling businesses and universities to halt collaboration with China. Orlando said academics have made clear there are benefits from such partnerships.

The officials urged companies and universities to come up with best practices, review how data is stored and transferred, determine who has access to what and ensure vetting of contractors and subcontractors.

“If we can get the research community and private sector to be aware of what they’re doing and engineer security measures, we have a much better chance” of mitigating the risks, You said. 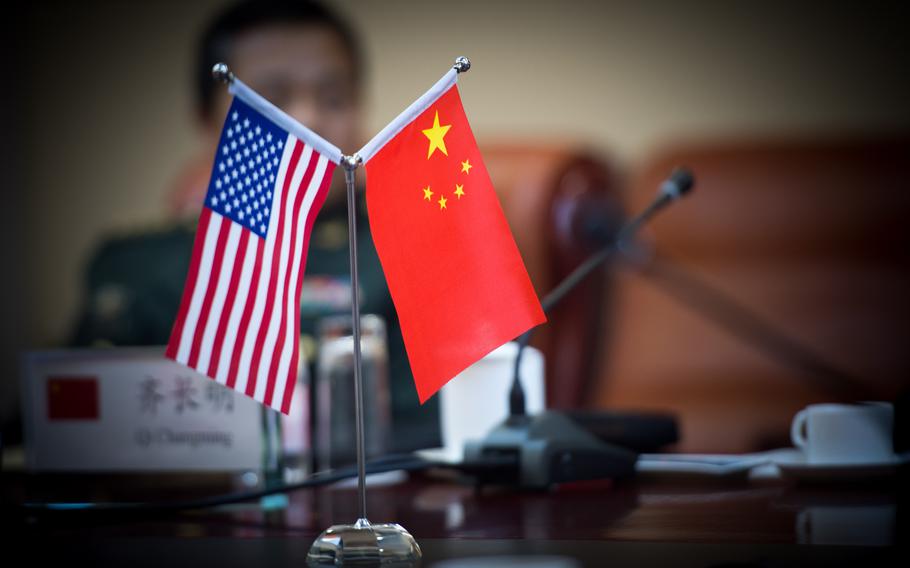 The United States flag and Chinese flag are displayed at a meeting between officials in Beijing, China, on Feb. 21, 2014. (Mikki L. Sprenkle/U.S. Army)