Mammoths and other giant creatures of the Ice Age such as woolly rhinos survived longer than scientists thought, coexisting with humans for tens of thousands years before they vanished for good.

That’s according to the results of an ambitious 10-year research project that analysed DNA from hundreds of soil samples across the Arctic.

The scientists involved in the project collected 535 samples of permafrost and sediment from frozen lakes, often in extremely cold locations from across Siberia, Alaska, Canada and Scandinavia, in 73 locations where the remains of mammoths have been found.

Analysis of DNA contained in the soil showed that mammoths were living in mainland Siberia 3900 years ago – after the Great Pyramid of Giza was built in Egypt and the megaliths of Stonehenge were erected.

Most woolly mammoths were previously thought to have died off about 10,000 years ago, except for a very tiny population that survived on remote islands off Siberia.

Woolly rhinos, the researchers said, were still roaming around the Arctic 9800 years ago.

Earlier studies said they went extinct about 14,000 years ago.

Instead, extinction came when the last areas of Mammoth Steppe – a unique ecosystem in the Arctic that doesn’t exist today – gave way to peatland as the climate became warmer and wetter.

“The authors present several dates for mammoth, woolly rhino, horse and steppe bison that are also substantially younger than the fossil record indicates, which builds a stronger case for late survival across the Arctic than has been made previously,” Tori Herridge, an evolutionary biologist and mammoth specialist at the Natural History Museum in London, said.

“I am very excited to see how this work develops, and what new data might arise to support or refute this. I am sure it will come under intense scrutiny.”

Ms Herridge was not involved in the research.

Most ancient DNA is typically taken from bones or teeth (the oldest DNA ever sequenced was from a mammoth tooth and was more than 1 million years old), but new techniques mean that genetic material preserved in soil can now be analysed, dated and sequenced.

All animals, including humans, constantly shed genetic material when they pee, poop and bleed, lose hair and slough off dead skin cells.

This genetic material leaches into the soil, where it can remain for tens, if not hundreds, of thousands of years when the conditions are right – such as in frozen ground.

“An individual animal continuously spreads DNA throughout its lifetime in its dung, urine, epidermal cells, and hair, containing millions of DNA segments as it wandered across its full geographic range, but only left one skeleton upon its death, which is far less likely to have been preserved, recovered and dated,” one of the study’s authors, Yucheng Wang, a research associate in the Department of Zoology at the University of Cambridge, said.

“By sequencing only a few of these DNA molecules preserved in the environment, we can identify its existence and range. It is therefore not surprising that sedimentary DNA could produce a later and more accurate extinction estimate.”

Known as environmental or eDNA, the technique has been used by archaeologists to shed light on ancient humans, and the same method has also been used during the pandemic to test the sewage of human populations to detect and track COVID-19.

The study, which is published in the journal Nature, also detailed the Arctic ecosystem for the past 50,000 years.

The environment in which mammoths lived, known as the Mammoth Steppe, was cold, dry and regionally complex, with a distinct community of vegetation composed of grasses, sedges (a grass-like plant), flowering plants and shrubs.

As part of the research, the team sequenced the DNA of 1500 Arctic plants for the very first time.

Why large, grazing animals such as the mammoth went extinct has been debated for more than a 100 years, Mr Wang said.

There are two main theories: Mammoths were hunted to death within centuries of their first contact with humans, or they weren’t able to adapt quickly enough to a rapidly changing climate at the end of the Ice Age. 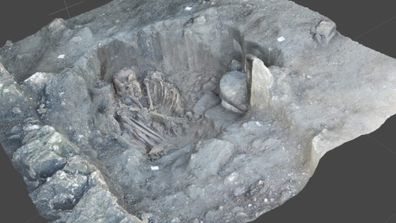 Mr Wang said their research supported the theory that climate change at the end of the last Ice Age 12,000 years ago played the major role.

The longer overlap between humans and mammoths in the Arctic region, together with a detailed understanding of the Mammoth Steppe ecosystem and how quickly it changed, strengthened the case against the idea that humans were the main driver of mammoth’s extinction, Wang explained.

“When the climate got wetter and the ice began to melt, it led to the formation of lakes, rivers, and marshes. The ecosystem changed and the biomass of the vegetation reduced and would not have been able to sustain the herds of mammoths,” Mr Wang said.

“We have shown that climate change, specifically precipitation, directly drives the change in the vegetation – humans had no impact on them at all based on our models.”

Ms Herridge at the Natural History Museum said more work needs to be done on the human presence in the Mammoth Steppe if any human role in the disappearance of mammoths is to be ruled out.

In the models used in this paper, she said, researchers used the scarce presence of human remains in the archaeological record and the existence of a climate suitable for humankind as a proxy, not DNA.

Much finer data is needed to understand whether and when humans and mammoths actually overlapped in these regions.

“Environmental DNA studies like this have a lot of potential for directly testing for the presence through time of humans across the Arctic, in much the same way as they have done here for mammoths – this is the sort of high resolution data we need to tease apart the true dynamics of the extinction of the woolly mammoth,” she said.

“Overlap data alone won’t cut it, as it isn’t the last mammoth that matters, it’s working out what drove mammoth numbers down so low that they were reduced to just few isolated and vulnerable populations.”