Located in northwestern China’s Xinjiang region, the Tarim Basin is a rich confluence of geology, history, and culture. In fact, it is speculated that this region may be one of the last to be inhabited in Asia. The region acquired international renown in the 1990s when hundreds of naturally mummified remains were discovered. Dating back to between 2,000 BC and 200 AD, these Tarim Basin mummies had a seemingly “Western” appearance. In order to solve this mystery and understand the origins of these first settlers in the basin, experts used genome sequencing. Their results have now been published in the journal Nature. 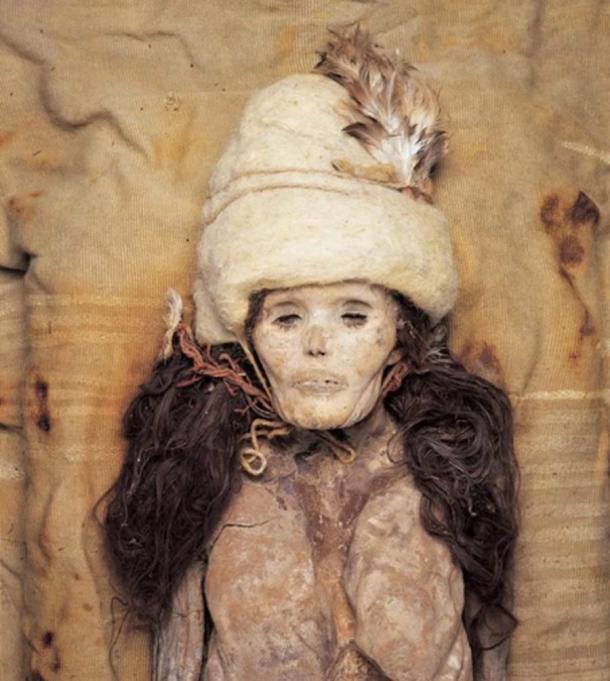 One of the Tarim Basin mummies, a naturally mummified woman excavated at the Xiaohe cemetery. (Wenying Li / Xinjiang Institute of Cultural Relics and Archaeology )

The multinational team of Chinese, European, and American researchers analyzed the DNA of 13 of the earliest Tarim Basin mummies, in the hope of decoding the mystery of their allegedly Western appearance. What further confused this appearance was that they were wrapped in felted and woven clothing, with cheese, wheat, and millet found in their graves. This suggested that they could even have been long-distance Bronze Age Yamnaya herders from the West Asian steppes near the Black Sea region of southern Russia, or farmers migrating from the deserts of Central Asia, who had strong ties to early farmers from the Iranian Plateau, reports CNN. 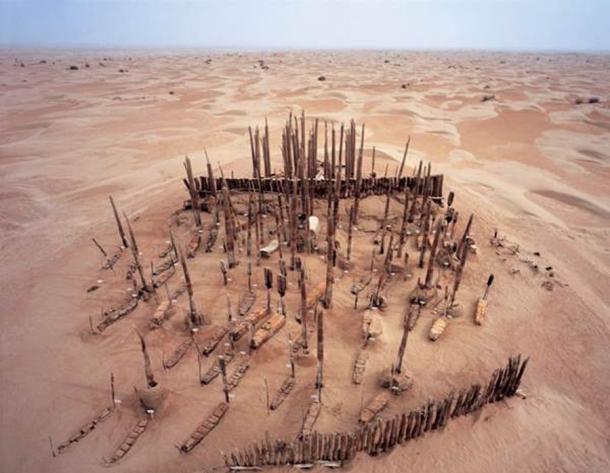 Aerial view of Xiaohe cemetery where some of the Tarim Basin mummies were found.  Source: Wenying Li / Xinjiang Institute of Cultural Relics and Archaeology

What is particularly striking about these Tarim Basin mummies is the level of preservation of both their bodies and clothing – with some specimens being up to 4,000 years old! What has worked in their favor is the dry desert air, which has acted as a natural preserver, protecting both the facial features and the original color of their hair.

The results suggest an entirely different origin for these Tarim Basin mummies. The team argues that rather than being newcomers to the area, they were actually a local group that descended from an ancient Ice Age Asian population. “The mummies have long fascinated scientists and the public alike since their original discovery,” explained Christina Warinner, an associate professor of anthropology at Harvard University, the group leader of microbiome sciences at the Max Planck Institute for Evolutionary Anthropology and an author of the study.

“Beyond being extraordinarily preserved, they were found in a highly unusual context, and they exhibit diverse and far-flung cultural elements,” explained Warriner in CNN. “We found strong evidence that they actually represent a highly genetically isolated local population,” she concluded. 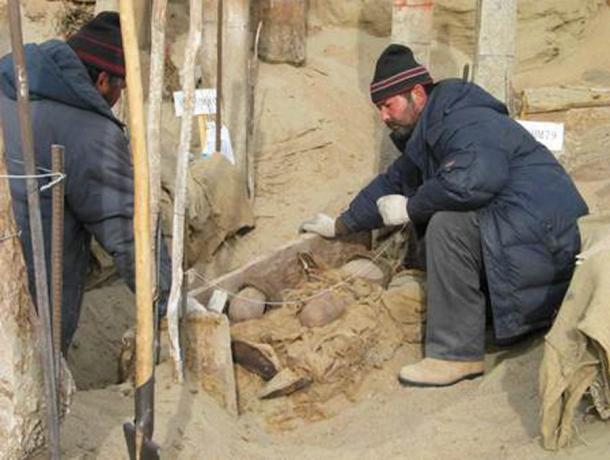 Excavation of one of the Tarim Basin mummies at Xiaohe cemetery. (Wenying Li / Xinjiang Institute of Cultural Relics and Archaeology )

According to the anthropologist, the Tarim Basin mummies seemed to display a non-insular cultural look, open to being recipients of new technologies from herders and farmers, despite their genetic isolation. “They built their cuisine around wheat and dairy from West Asia, millet from East Asia, and medicinal plants like Ephedra from Central Asia”, explains Warinner. They also went on to develop unique cultural elements, shared by no other groups. Apart from the Tarim Basin mummies, who were 13 in number, five other mummies were also dated to between 3,000 and 2,800 BC from the neighboring Dzungarian Basin.

This Ice Age Asian population were direct descendants of a population known as ancient North Eurasians, who had largely disappeared by the end of the last Ice Age. In today’s population, a very tiny fraction of the population possesses their genomic distribution in their DNA, with indigenous populations in Siberia and the Americas possessing up to 40%. The Tarim Basin mummies show no similarities with contemporary populations of their time, living in genetic isolation.

“The Tarim mummies’ so-called Western physical features are probably due to their connection to the Pleistocene Ancient North Eurasian gene pool.” Clearly, extreme environments play an active role as barriers to human migration in these extreme environments, elucidated the researchers in their paper, explaining that the extreme genetic isolation kept them different from neighboring groups. There were no signs of admixture (having babies with other groups), and the traces of the original group had disappeared by about 10,000 years ago. 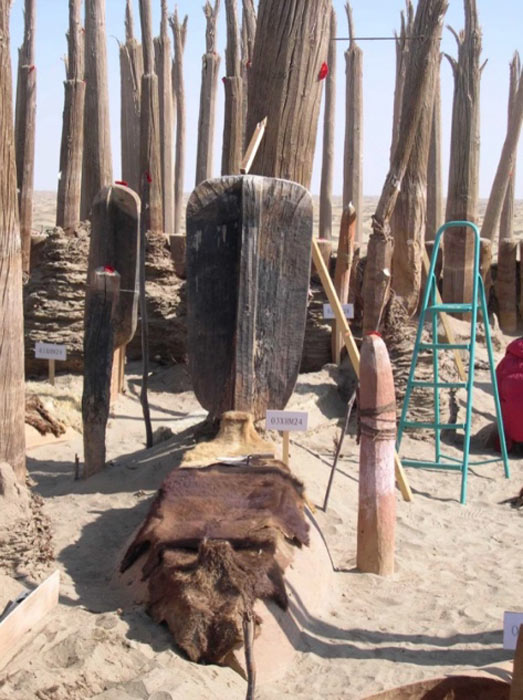 However, moving forward, there are several unanswered questions which came up during the study. Firstly, the sampling size of 18 mummies in total is too small to make a deterministic claim. Secondly, the mystery of boat burials (which is how these mummies were found) is far from been resolved.

Culturally, no other tradition or people has been seen to bury their dead in this manner, and it is unclear what this kind of a burial means in the first place. The closest comparison to this has been the Vikings, who are remembered as a seafaring people. Even the distribution of the sites under analysis, specifically the Xiaohe cemetery and the Gumugou cemetery in the Tarim Basin, and from the neighboring Dzungarian Basin, is not a wide enough spread for conducting data sampling.

“Reconstructing the origins of the Tarim Basin mummies has had a transformative effect on our understanding of the region, and we will continue the study of ancient human genomes in other eras to gain a deeper understanding of the human migration history in the Eurasian steppes ,” concludes Yinquiu Cui, a senior author of the study and professor in the School of Life Sciences at Jilin University.