I’d like to do something in R that seems rather simple: draw a nice plot of a human gene, with exons and introns marked (maybe even using a different color for CDS vs. UTRs, but I can live without that for now), with the position of a bunch of mutations overlaid. I’ve tried a few packages for this, the best of which (so far, has been ggbio. Here’s some code for reproducibility: 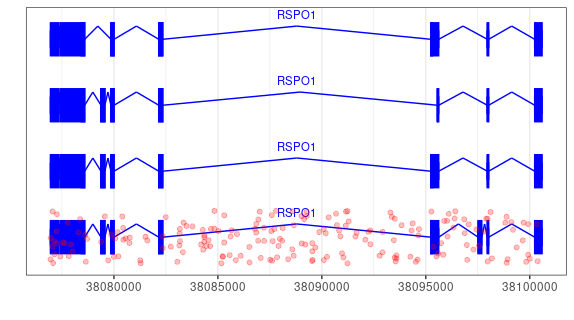 This is not a bad start, but I would really like to show only a single transcript, not all four splice forms – e.g. the “canonical” Refseq transcript. This is just for ease of visualization/presentation. I think what I need to do is to subset the annotation object Homo.sapiens, so that it contains only Refseq transcripts, and then pass that object to the autoplot command. I’m not sure how to do this, though – or if there is a better way to achieve this goal with a different package. (Note that I tried dandelion and lollipop plots using the trackViewer package, but the SNP density is way too high to visualize that way. Also, I really like the fact that ggbio can be combined with traditional ggplot commands, as I’ve done here.)